Good morning....I bought this house (954) about 5 years ago. A lot of work has been required to clean it up - and more work to do yet.

It is in the historic "district" of beach, apparently built in the 1890's. I have met a few people who grew up in the area who remember the home, or "played in that house when I was a kid". Nobody has any info to offer however.

I have searched everywhere but cannot find either names of those who owned the home or - more importantly - photos (pre-2000). I reached out to the city and am still waiting for a reply; as well as my real estate agent. The library is not a resource until the pandemic recedes

Names might lead to social media posts or other public stories.

My goal is a collage of photos on the wall either in the hallway or living room which tells the history (good and bad) of this house.

Any photos or hints on where to look would be appreciated.

I attached a photo of the front.
Shawn 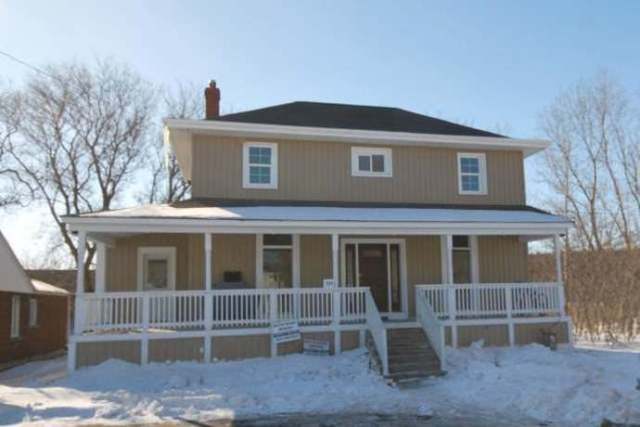 I used to live a couple doors to the north, but I don't recall much history on the place. In the old gallery we have photos of many of the beach home that were taken back in 1980. I will have a look through to see if your place is in there.
Likes: Shawnperras

scotto said:
I used to live a couple doors to the north, but I don't recall much history on the place. In the old gallery we have photos of many of the beach home that were taken back in 1980. I will have a look through to see if your place is in there.
Click to expand...
I checked through all of our old house photos from 1980 and there isn't one for that address, seem to have every house around it but not that one.
The insurance maps from 1900 show a house in that spot (420 mark) and there was a open veranda around the front and south side of the house, much of the south veranda is now closed in and part of the house living area. Many of the houses back then had names back then such as "The Moorings", but no name on your house.
A Beach house that old would of had very wealthy owners back in 1890. 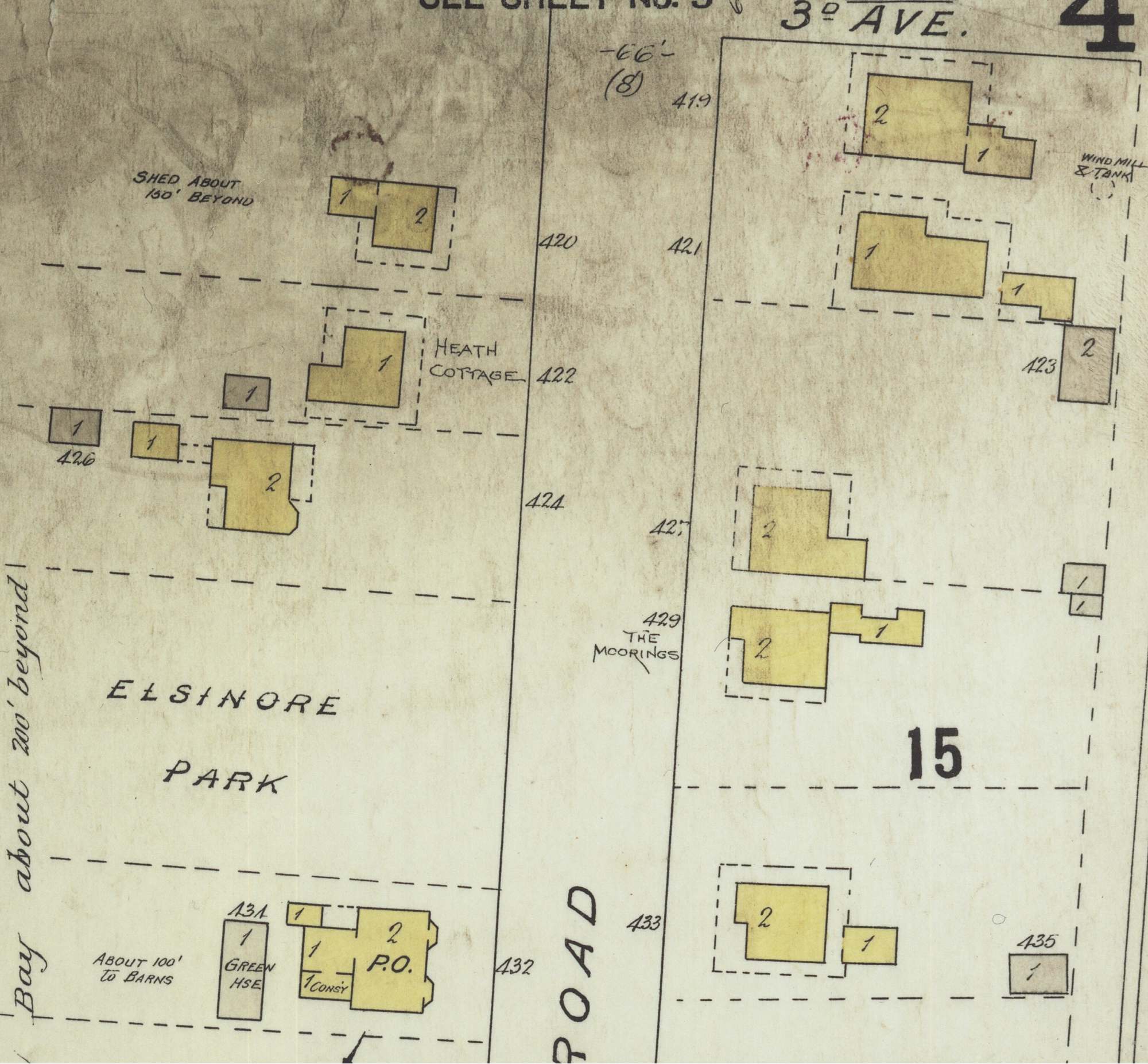 Very nice - even w/o pics. I can use this anyhow.

The Heath Cottage and 424 are likely the house next door that just sold (Ruth).

Shawnperras said:
Very nice - even w/o pics. I can use this anyhow.

The Heath Cottage and 424 are likely the house next door that just sold (Ruth).

thx Scott appreciate this
Click to expand...
I would say that 419 and 421 are long gone, the Wallace (Ruth) place would be considered a new build even though it was most likely built in the 1950's. Also that house covers two lots. The two across the street would originals like your place.
I went over the address numbers many years ago with our Beach historian Fred Briggs, I found out from him that the numbers changed at one point and 420 changed to 954, so the addresses restarted from the south end of the Beach to the canal. The Bridge is last address, being 1157.
There could be some info at main library on the original owners as once again, would of had some wealth to live here 1890's. The Sanford's would be a good example, they would of been close neighbors.
Likes: Shawnperras

From Dorothy Turcotte's book, The Sand Strip (copyright 1987)
Lots were laid out in 1875, and were auctioned off, then subleased to the purchaser. Wealthy Hamiltonians were quick to recognize the opportunity. Before long, spacious Victorian summer homes began to appedr south of the Canal.
The first summer cottage is believed to have been built by a Mr. A. Turner, possibly Alexander Turner of James Turner and Company, one of the largest wholesale grocers in the country. Then Col. Villiers built a thatched house known as "The Bungalow". The building boom was on!
Other well-known Hamiltonian's who chose the Beach for their summer residences were Sir J. M. Gibson, a founder of the Dominion Power and Transmission Company and M.P.P. for Hamilton; the Hon. W. E. Sanford, senator and clothing manufacturer; John Moodie of Eagle Knitting Company; George Tuckett, a former mayor of Hamilton and president of Tuckett Tobacco Company; F. Mackelson, city solicitor; Frank S. Glassco, manager of the Imperial Bank; S.O. Greening of the B. Greening Wire Company; R. M. Wanzer of Wanzer Sewing Machine Company; and Mr. Braden who was president of Westinghouse.
In 1891, F. E. Kilvertbuilta two-storey Queen Anne style house which he called The Moorings. Kilvert was a lawyer by profession, and served as mayor of Hamilton in 1877-78. Later he was a Member of Parliament. The Moorings is still standing, and has been designated a Heritage property by the Hamilton Local Architectural Conservancy Advisory Committee (LACAC).
Another beautiful summer home was built in 1891 by Charles Murton who had a coal business. Fashionable in its day, the house is still spectacular for its comer tower. This twenty-room house featured a wide verandah, servants'quarters, a butler's pantry, and a bathhouse in the rear. The Murton family owned the house until 1945. Now owned by Bud Cahill, it's often referred to as Cahill's Castle.
Nearby is a house called the "Heart House" or the "Sweetheart House" because its verandah trim is shaped like the tops of huge hearts. This lovely home was built by the Dexter family in 1898. Now stuccoed with pink trim, it was originally white with dark green trim.
'The Fishers of Fisher Brass Foundry also had a large home. Mr. Fisher's lawn was famous for its profusion of ornaments. Also, Mr. Fisher was notable for his choice of pets. He had a cinnamon bear that he used to walk to the store on a leash so that he could buy it an ice cream cone. He also owned a monkey named Jocko who liked to have orange juice and a poached egg on toast for breakfast.
Another fine house called Roselawn was built by Wilfred H. Montague of the Sons of England Insurance Company.
This house is also still standing.
Perhaps the most breath-taking building south of the Canal was the Royal Hamilton Yacht Club. The R.H.Y.C. was organized in 1888. Almost immediately, plans were made to build a clubhouse. William Stewart, well known Hamilton architect, designed the building and supervised the construction. The contractor was William Peebles who lived on the Beach at Station 30.
Likes: Shawnperras

Dug this out of another thread, the fairly new houses had a listing back in 1895 and I was hoping to get a name of the owner back then, unfortunately the house is listed as vacant. It is located between the J.H. Mills, Lynden Lodge and Mrs. W.R. Mills, Heath Cottage.

I see Heath House as being next door in some "maps".
Not giving up.
Still looking for a history.
Dug up under the porch and can see the add ons over the years (not to mention the personal files of past residents).
Met another person who "remembers the house as a kid" but no detail
Reached out to the city as well as real estate brokers/agents but not detail yet
Thanks for the info so far
Likes: scotto

Shawnperras said:
Dug up under the porch and can see the add ons over the years (not to mention the personal files of past residents).
Click to expand...
Any names in those files?

I recall the house in my younger years as I grew up not far from there and later on lived next door for a few years, but there wasn't much to remember. There was an apartment next door that demolished in the early 70's.
You must log in or register to reply here.
Share: Facebook Twitter Google+ Reddit Pinterest Tumblr WhatsApp Email Link
Top Bottom