Thirty years ago tonight, Hamilton's Andy Brown didn't wear a mask in a game against the Atlanta Flames.

By Scott Radley
Additional Articles by this Columnist
The Hamilton Spectator


Goaltender Andy Brown played a total of 62 games in the National Hockey League, including this one for Pittsburgh Penguins. He later saw action in the World Hockey Association with Indianapolis Racers and didn't use a mask. A back injury ended his career at age 33.


It's probably some kind of miracle that he was able to skate off the ice at all. As opposed to, say, being carried off in a body bag. Or dragged out on a gurney. But in a new world in which pucks were flying off banana-curved sticks at better than 100 miles per hour -- with even the shooters only guessing where their wild shots were going -- he'd survived.

He still had both eyes. He wasn't drooling. He'd even managed to avoid suffering a blunt-force frontal lobotomy. In fact, save for a couple dozen gallons of blood he'd lost over the years, his body was largely intact.

It could have been worse. Because when Hamilton's Andy Brown skated off the Atlanta ice and right out of the NHL 30 years ago tonight -- following his Pittsburgh Penguins' season-ending 6-3 loss to Pat Quinn and the Atlanta Flames -- he carried one of sports' most dangerous practices with him into the history books. Nobody knew it at the time, but it would be the last time a goalie would play an NHL game without a mask.

After generations of goalies voluntarily planting themselves in front of grown men's slapshots with their faces covered by nothing more than a film of sweat, the lineage of the great bare-faced keeper stopped with a quirky journeyman from Steeltown.

When a reporter calls three decades later to ask about his memories of that night, there's a long silence.

"I took too many pucks in the head to think that far back," he says.

He's joking. But not completely.

By 1974, hockey goalies were as recognizable by their masks as they were by their sweaters. Ken Dryden had the skeleton. Gerry Cheevers was wearing the stitches. Bernie Parent had the Flyers' wing on each temple. Doug Favell had the giant Maple Leaf. Tony Esposito had the plain Jason-style mask.

It'd been 15 years since a bloodied Jacques Plante had first worn his rudimentary mask in a real game and most who followed had discovered not only the protective benefits masks provided, but also the artistic opportunities they presented. Soon, all were dabbling in the arts, adding their own personal touches to their fibreglass canvasses. Even avowed bare-facer Gump Worsley had broken down earlier in the year and put a lid on for his final season.

Not Andy Brown. The Pittsburgh goalie had no use for one.

Period. End of story. If you need a better explanation ... well ... too bad. He can't really give you one. He didn't want to wear one, so he didn't.

Sure it sounds crazy. In a time when goalies wear more pads than most bomb disposal experts, the thought that once upon a time, someone thought it was a good idea to protect everything but his head seems insane.

But there hadn't been any real need for one while learning to play with Quinn at Parkdale Arena in the Police Minor hockey system. He didn't seem to need one in junior hockey in Guelph, Brampton or Gander. He didn't even need one in the minors, including during stops in Johnstown, Baltimore, Long Island, Fort Worth, and Tidewater. So why start in the pros?

Actually, let's back up a bit. While he may not have technically needed one, but he sure could've used one. Because from the time players learned how to raise the puck, his head served as a test site for bruise and cut research. Medieval barbers did less bleeding than Brown.

One season, there wasn't a single day that he or the team's other goalie didn't have a black eye. But at least that year he had a backup. Most years, he was on his own. When a shot busted him open -- which happened often -- he'd leave the ice, get repaired and come back.

"You'd feel that hot stuff running down your face," he says. "Most times you were numb when you got hit, so they just sewed you up."

What he means is, without freezing. And in a hurry, because the game wasn't going on until he got back on the ice. The unwritten rule was, if he could see, he could play. No matter how bad the damage to the rest of his face was. And it could get nasty.

"The screen shots are what used to boink you," he laughs.

Interesting choice of words. The pucks didn't nail him. Or smash into him. They boinked him. Such a playful verb. Sounds almost cartoon-like. Funny even. Until he describes the damage.

In his first year of pro hockey, he was the only goalie for the Johnstown Jets of the East Coast League. A slapshot hit him square in the face, breaking his nose, knocking out four teeth, splitting open his gums and his tearing his lip. Worse -- oh yeah, it gets worse -- the only medical professional in the rink that night was a vet. And he'd been drinking all night.

But the game had to continue. So Brown subjected himself to the suturing skills of a drunken man who likely wouldn't have been allowed to operate on a goat that night. Then with his face puffy, throbbing and still bleeding a bit, he stumbled back onto the ice to finish the game.

Of course, all the boinks weren't that bad. But plenty were.

"You had lots where you couldn't eat for a while," he says. "I had lots of soup sandwiches and milkshakes."

He was knocked out cold plenty of times. Had concussions. Suffered a cracked jaw. Had 200-300 stitches sewn into his face. His nose was broken often. His cheekbone was cracked. His eyes occasionally swelled shut and filled with blood. And he lost teeth.

"All of them except a couple in the back," he laughs again.

There were other injuries too. Broken ribs. Cracked knuckles -- he was, after all, the record-holder for most penalty minutes by a goalie until Billy Smith came along -- on both hands. A broken collarbone. And his toes.

It's the height of irony really. For years the guy leaves his face unprotected against frozen vulcanized rubber travelling only slightly slower than the speed of sound and the most pain he ever experiences was in his toes.

It was the summer of 1966. To make ends meet between seasons he was working at a steel mill. While operating a pile driver, he somehow sheared the two big toes off his right foot.

That was bad enough. But when hockey season started a couple months later, he couldn't tell anyone what happened. This was his career, after all. So instead, he just crammed his still-swollen-and-aching foot into his skate and played.

For so many reasons it was a bad idea. But the most obvious arrived just minutes into the season when a slapshot caught him flush on the toe of his skate.

"Swollen?" he says. "Oh boy. And tender? Oh boy. Almost made you wet your pants sometimes when you got shots on the end of the toes."

He recovered. And by the 1971-72 season, the goalie who had never been drafted but had made himself into the AHL's top keeper, was picked up by the Detroit Red Wings. Two years and 17 NHL games later, he was traded to the Penguins where he made it into another 45 games. But by then, Pittsburgh had two young goalies -- Denis Herron and Jim Rutherford -- who needed ice time.

So, after that historic night in Atlanta, he moved on. Went on to play parts of three seasons with the Indianapolis Racers of the fledgling World Hockey Association. Without a mask, of course. But a back injury, followed by spinal surgery, ended his career at 33.

The day he retired was the last time he ever wore skates. Or went to a live game. He watches on TV now and again, but he wouldn't even describe himself as a marginal fan.

He loved hockey. Hated to leave it. Loved the players especially. But he doesn't have time for the game now. The years since retirement have been filled raising thoroughbreds on his 18-acre (7.28-hectare) farm in rural Indiana, smack in the heart of corn and soy bean country. He has to since he receives no pension from the NHL since his 62 big-league games weren't enough to qualify.

Brown can't remember the last time he was back home in Hamilton. His mom, Bertha, still lives here on the Beach Strip, but when it's time to visit, she goes there.

If the first miracle of this story was that he survived his hockey career, the second is that now at 60, he's in wonderful health. In fact, he has almost no lingering reminders of those days. Except one.

"I don't grow a beard," he says, the laugh returning again. "There are nicks all over the place. I don't think I'll take over Robert Redford's job."


"Reprinted with full permission from the Hamilton Spectator"

Hamilton racers who are worthy of the Sports Hall of Fame

Among the suggestions was Andy Brown. This Beach Strip resident competed in two sports. Working his way through hockey’s farm system, Brown made the big-time as a goalie in the NHL and WHA, retiring from the Indy Racers in 1977.

Aside from his day job, Brown tried his hand at auto racing, and with the help of Jimmy Howard, bought and repurposed an ex-Mario-Andretti front-engined Indy car and went Super Modified racing, running some USAC events in the late 1960s. He also had a Late Model Chevelle which he raced locally at tracks such as Cayuga Speedway. 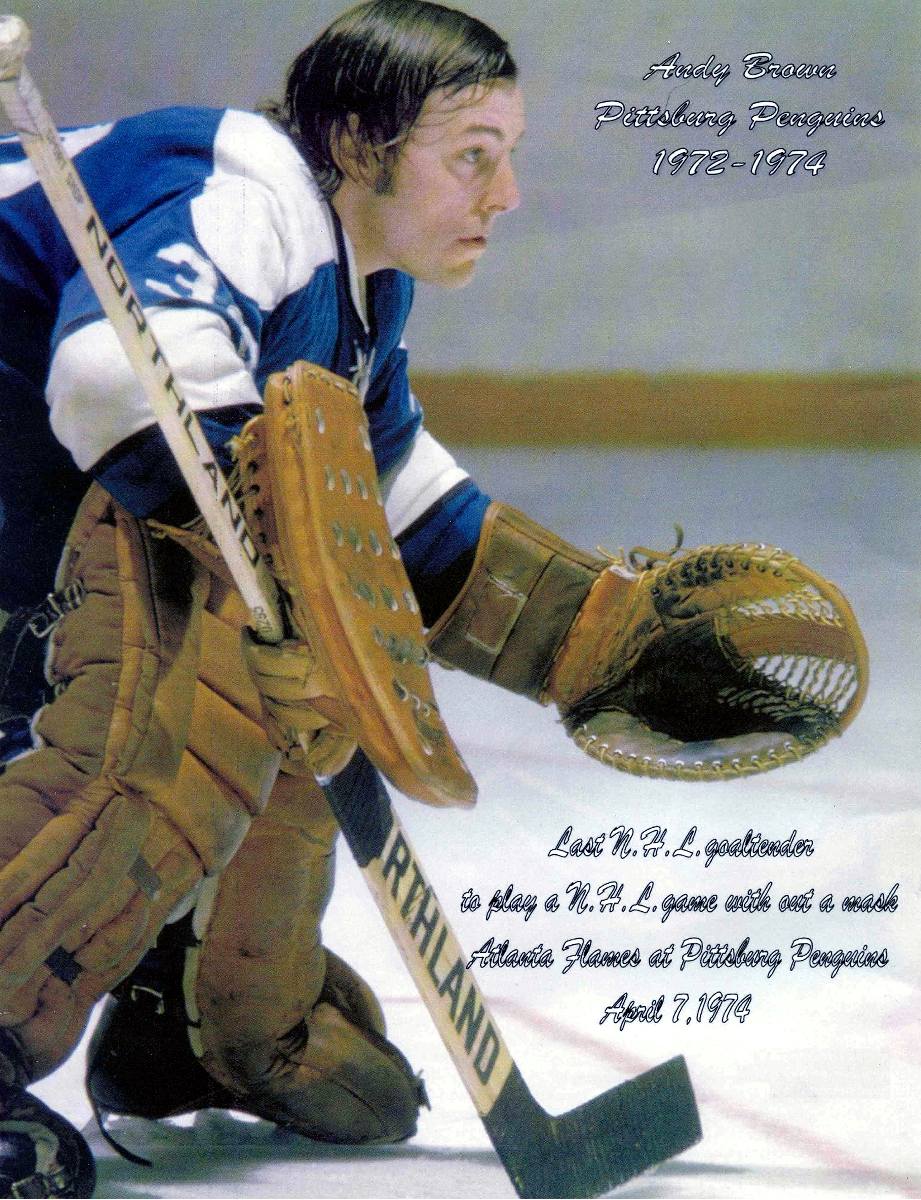