Both Lakeside Piers to be Closed.

Two days ago Transport Canada posted "Danger Do Not Enter" signs at the entrance of the Burlington and Hamilton lakeside piers. They have safety and liability concerns and will be blocking off public access. Transport Canada plans to have barriers erected by March 2021. Attached is a map showing the locations, as well as an example of the type of barrier.

The federal government plans to block public access to the Burlington shipping canal piers over safety fears on the popular but wave-battered concrete walkways into Lake Ontario.
But politicians in cities on both sides of the canal are now lobbying to keep the piers open — and failing that, the Hamilton-Oshawa Port Authority might take them over.
The twin 321-metre long piers that usher ships into Hamilton Harbour have long been a magnet for walkers, cyclists and fishing fans who treat the canal as an extension of the public waterfront trail.

That access could end as early as March, however, when Transport Canada intends to fence off the piers to “mitigate the possibility of personal injury” from icy conditions or storm-fueled waves, spokesperson Sau Sau Liu said.
It’s not clear if a particular injury or incident sparked the sudden shutdown plan, but residents have complained in recent years about waves overtopping the piers during record high lake levels.

Transport Canada did not respond to questions about the structural integrity of the piers, but the federal government is already spending $26 million to rehabilitate old concrete piers in Port Dalhousie that were at risk of collapse. For now, the federal government has added “Danger, Do Not Enter” signs where the public waterfront trail meets the Burlington shipping canal, which also marks the municipal boundary with Hamilton.
Burlington Mayor Marianne Meed Ward said she is seeking a meeting with Transport Canada Minister Marc Garneau “to try to find a different solution” for the piers, which form the eastern end of the city’s planned $50-million waterfront park master plan along the lake.

She suggested temporary storm blockades or even a winter closure of the piers, rather than a wholesale shutdown. “We would be bombarded with complaints if (a shutdown) happened,” she said. “Those piers are well-used and well-loved by people on both sides of the canal.”

Hamilton Ward 5 Coun. Chad Collins said he is also hoping for a reprieve.

The beach strip councillor said he would be willing to consider putting ward infrastructure cash toward “minor maintenance or amenities” — think trash cans, benches or safety rails — if that would help deal with federal concerns.

Right now, he noted residents routinely ask the city to fix cracks in the concrete or sweep the Hamilton-side pier of grit and trash — something the municipality cannot do on a federally owned structure.

“Those piers have been a very active people place for decades, probably even longer,” Collins said. “It’s hard for me to understand what the sudden urgency is to close them after all this time.”
Neither city wants to buy or take over full responsibility for the aging canal piers — an idea floated by the previous federal Conservative government in 2015.

Transport Canada says it will be taking more measures to prevent public access to the Burlington Canal piers in the spring over safety concerns by installing lockable swing gates.
The federal government, which owns the canal piers by the lift bridge, dropped large concrete blocks and put up warning signs at the site last fall restricting access in order to mitigate “personal injury.”

However, a spokesperson for Transport Canada says further measures will be taken due to an increase in pedestrian activity at the commercial site.

“Transport Canada is aware that the Burlington Canal piers have been used in the past by local residents for recreational purposes, however, this is not the intended purpose of this commercial site,” spokesperson Clay Cervino told Global News.
Read whole article;
https://globalnews.ca/news/7616547/burlington-canal-piers-public-closure/

Regarding the potential closure of the Burlington Canal Piers by Transport Canada, the Hamilton Beach Community Council officially requests that the piers remain accessible to the general public.

We understand the liability implications of general access but hope the City, the Port Authority, and Transport Canada can work together to find a way to keep the Burlington Canal piers open to general public access.

We are available if we can be of assistance in any way.

Please take the time to sign the petition to keep the piers open;
https://petitions.ourcommons.ca/en/...5anlWzVyTqWrSFeMVfjEXPD698xG9I7i4YmnSBPYa5Xzw

By Lorraine Sommerfeld
Thu., Feb. 25, 2021
The federal government is considering closing access for people to the piers at the Burlington canal.
I have no idea if this is based on a warning from some consultant, an overreaction to some incident I haven’t heard of, or just more random government meddling that nobody wanted. I honestly wonder if governments — all three levels — have people who sit down each day with a list called The Biggest Problems We’re Facing, turn it over and write a new list called Stuff Nobody Cares About, and then proceed to tackle that list, instead.
Most people thunder past this concrete spit, high above it on the Skyway bridge with its bird’s eye view of the harbour on one side and the expanse of Lake Ontario on the other. Luckier people get to take the lift bridge, a deeply satisfying part of my childhood, its orange and green girders looming like some metal monster that once defied the physics my young brain could grasp.

Attached are the plans for the piers closure which was scheduled to begin next week, I have been informed that the project has been put om hold. Hopefully that is good news. 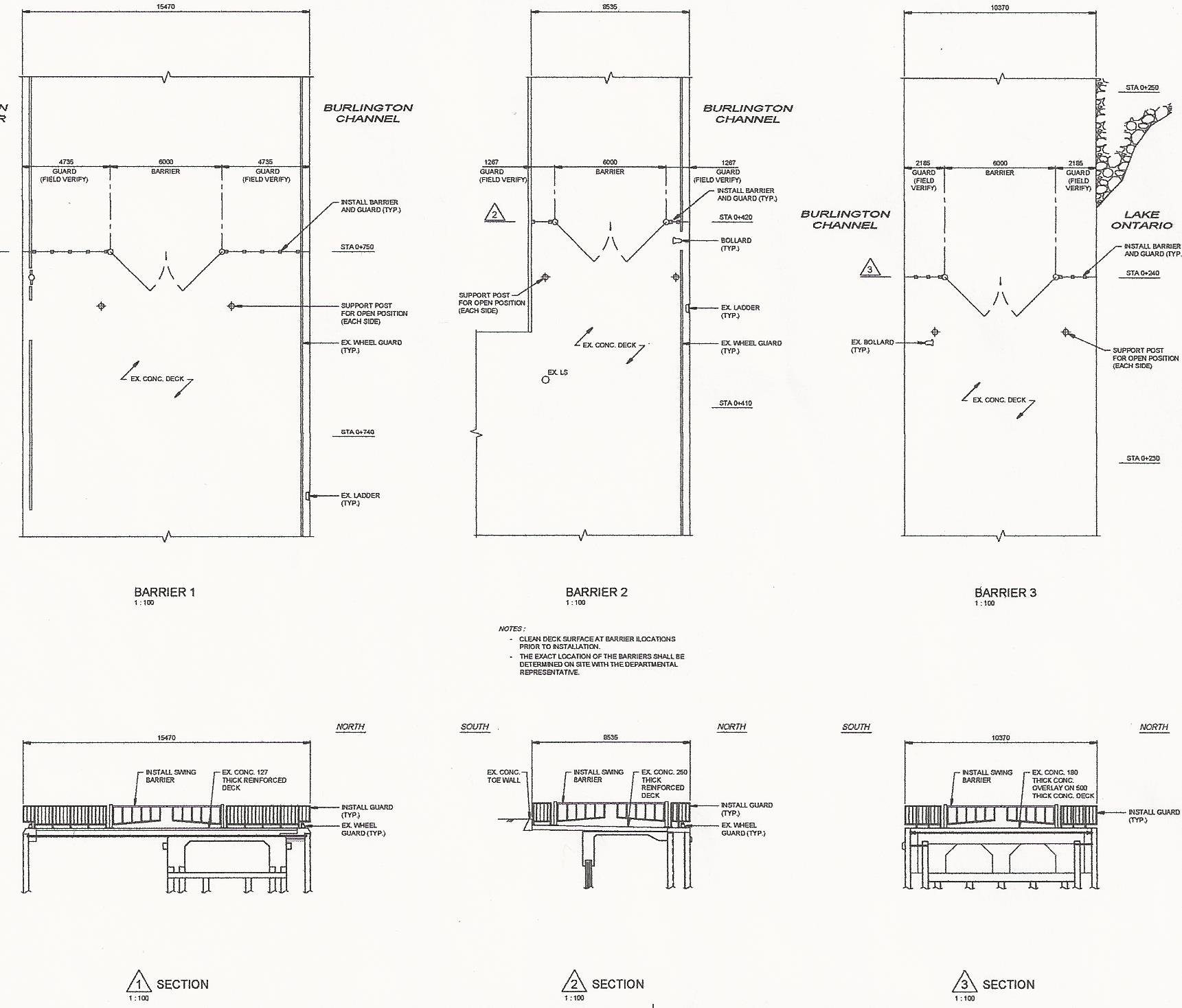 The federal government has backed off plans to block public access to the Burlington Canal piers — at least for now.
Liberal Hamilton MP Bob Bratina told residents at a virtual public meeting Thursday that Transport Canada has agreed to pause the planned installation of steel gates that would have prevented pedestrians from using the 321-metre concrete walkways into Lake Ontario.
The barriers had been scheduled to go up as early as next week.
Bratina said the government has promised “not to construct any obstructive devices” until ongoing negotiations over how to safely manage the popular-but-wave-battered piers are resolved.
In December, The Spectator first reported Transport Canada’s controversial plans to fence off the piers that flank the shipping canal into Hamilton Harbour over safety worries. Bratina said specific liability concerns are linked to a fall injury lawsuit from 2017.
The impending ban outraged residents on both sides of the canal that splits Hamilton and Burlington, spurring the creation of a Save Our Piers group and a House of Commons petition that now has nearly 1,900 signatures.
Group founder Matt Francis called the reprieve “huge news for the community” — but also “just a first step” toward permanent public access. “We’re not letting this go,” he said after the meeting.
Other residents shared stories at the meeting about why they value access to the piers.

Crews were at the canal today dropping steel gates that are to be installed on the pier, I asked the crew when the project was to start and they didn't know or couldn't say.