Builders of the Ambitious City

February 14, 2008
Suzanne Bourret
The Hamilton Spectator
(Feb 14, 2008)
It was a snowy day down on Beach Boulevard, the kind of day for sitting around a warm, cosy house listening to funny, sometimes touching stories about interesting characters from the days when people used to do things that we now consider strange.

Jack Kemp, 86, is a remarkable storyteller, and his family loves to hear him tell how his father, James Kemp, started James Kemp Construction in 1935.


Jack joined his older brother, Jim, at their father's business in the late '30s when business often meant doing repairs and alterations that were called "jobbing" in those Depression days.

But Jack had hung around his dad's side on jobs since he was a kid.

A favourite family story was the job at Dundas Dairy on Hatt Street in the early 1940s.

Those were the war years when there weren't enough bricklayers, says Jack, who remembers his dad, also a bricklayer, putting in a call one night to hire one called Chris Broom. Broom had his priorities.

"He said, 'Jimmy, I'll come on one condition.' Dad said, what's that? 'Providing I can get off the scaffolding when I want and go over to the Collins Hotel for a beer.'"

His dad agreed. And Broom usually headed over to the Collins every afternoon about 2 for a couple of beers, and then returned to work.

Eventually James' six sons worked in the business together. It was and still is one of the leading construction companies in the Hamilton area.

The third generation of Kemps has kept the operation going. It is one of the few family businesses that has continued this long in the Hamilton area.

Jack started working for his dad after he finished high school. And just like his name, he was a jack of all trades -- doing pick and shovel work, repairing roofs and pouring concrete. His salary was $10 a week. "It didn't matter if I worked 50 or 60 hours -- you still got $10. I'd start at 7:30 in the morning and go to 5 o'clock -- and work Saturday half a day.

"When work was very slow, around 1938, my brother Jim and I used to buy 45-gallon drums of roofing cement and go around and patch roofs. We would brush this liquid pitch on the flat roofs to try to make some money."

Building picked up in the late 1930s. The Kemps started to build a knitting mill for Mohawk Mills on Kenilworth Avenue North, now part of Dofasco, says Jack. Labourers got 35 cents an hour and carpenters and bricklayers got 65 cents an hour.

In 1942, he went overseas for war duties and considers himself lucky he was assigned as a mail sorter.

When he returned home in 1945, his father had bought property that had an actual office on Vansitmart Avenue.

Those were the days when bundles of shingles were taken up on shoulders, there were no barriers around scaffolding and eight or nine bricks at a time from a load of 2,000 were unloaded with a clamp.

Jack talks about the job they had in the morgue at Hamilton General Hospital.

"In those days, you could get a free pint of milk from the hospital. My late brother Lorne used to keep his milk in the refrigerator with the bodies to keep it cold. One day, Dr. Deadman came in to warn Charlie (Howard) and me an autopsy would be performed that afternoon. Charlie assured him we wouldn't be able to see anything because of the side wall.

"Later, Charlie and I heard this sawing noise and Charlie popped his head over the wall and said, 'What do you think they're doing, Jack? Cutting a skull off.' I couldn't get out of there fast enough," laughs Jack.

By the time his father retired in 1951, Jack was a purchaser with the company, and when Jack retired in 1995 after working 55 years, computers were just coming in.

What he sees being built today doesn't impress him.

"When I see how houses go up these days, I sometimes wonder how they stand up. It's mass production and they don't get the quality they should have," says Jack.

Jack keeps fit by walking at shopping malls and swimming; and in good weather by riding his bike for 90 minutes every day at Confederation or Spencer Smith parks.

Every second Monday of the month he meets for lunch with 12 retired pals from the construction industry.

The 800-square-foot house on Beach Boulevard that Jack built on to was purchased by his late wife, Rose Marie, for $2,700 in 1945, just before he came home from the war.

Now the 3,200-square-foot home, where they raised nine children, is the gathering place for the family's Sunday-morning breakfasts as he cooks for the 16 to 20 who gather around the table. 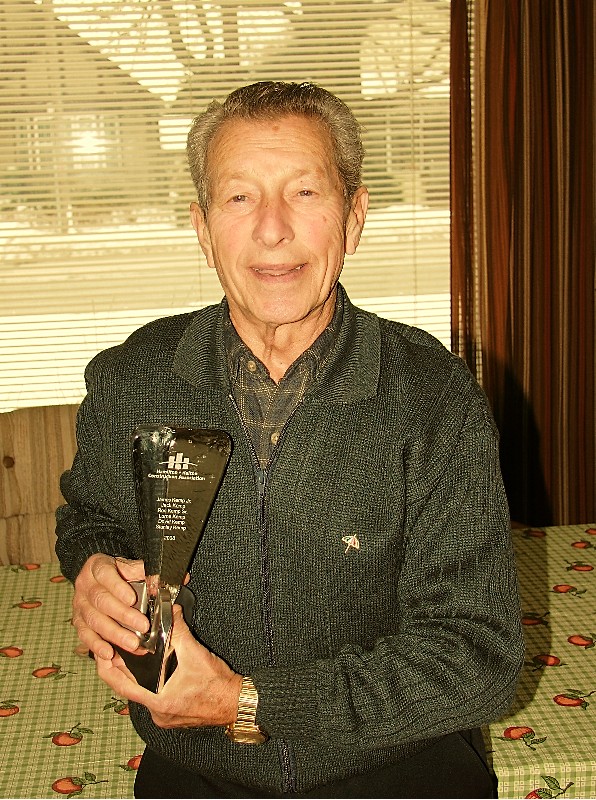