Catch a ride on The Beach Strip’s 1916 carousel ... in Tonawanda 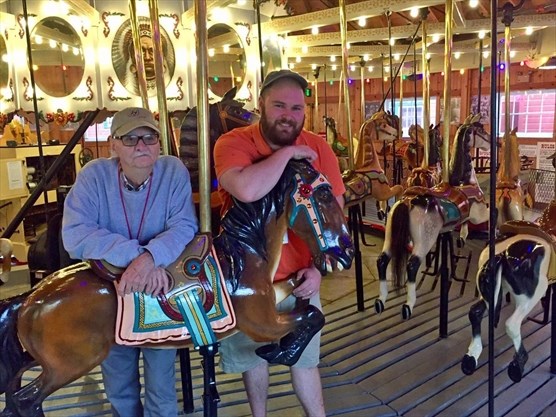 At the Herschell factory museum, Alex Buncy (left) and Ian Seppala will make sure you have a great ride on the carousel that used to be in Hamilton. - Paul Wilson photo 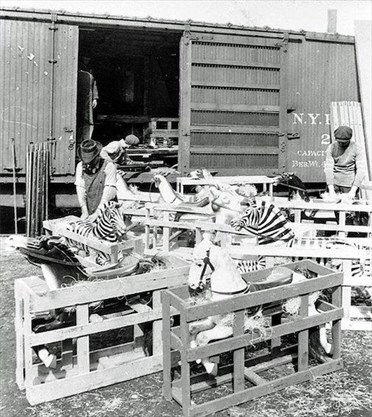 After the carousels were constructed and tested, workers disassembled and crated them for shipment. - Herschell museum archives 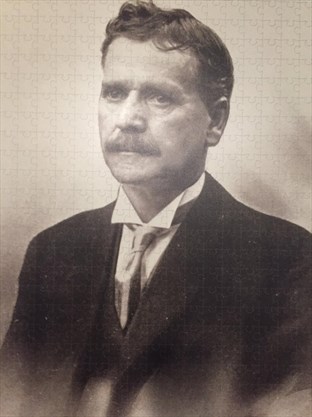 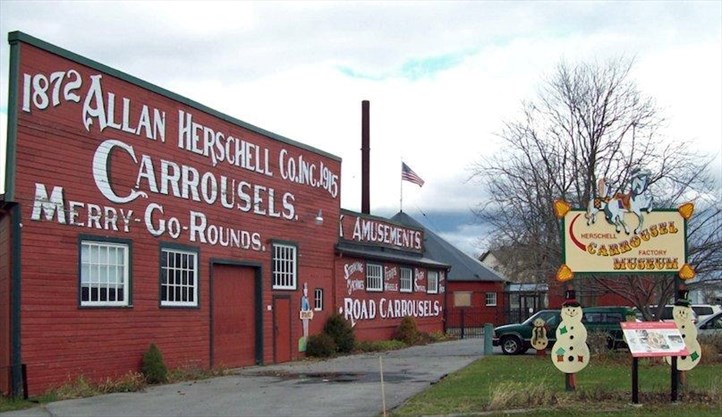 The museum is in North Tonawanda, the very place where they made carousels for parks everywhere. - Wikipedia 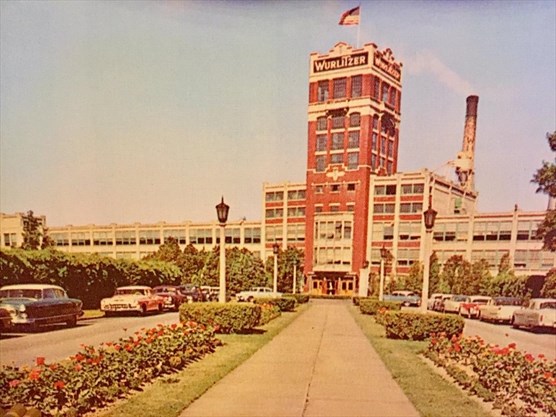 The carousel museum includes the Wurlitzer shop. The company’s band organs were made at the pictured building in North Tonawanda, now a brewery and chocolate factory. - Herschell museum archives
1 / 5
They broke ground in Buffalo last month on a $4-million roundhouse that will soon hold a new attraction on that city's burgeoning waterfront — a 1924 carousel, with a menagerie of deer, lions, tigers.
In St. Catharines, there is the 1903 Lakeside Park Carousel, still a nickel a ride. In Guelph, there's a classic wood carousel at Riverside Park.
And now Hamilton is getting a big new stretch of waterfront along Pier 8 — but no vintage carousel in the plans yet. We used to have one, but let it slip away.

In the early 1900s, when thousands took the radial line from downtown Hamilton for a day at the beach, a small cluster of amusements appeared near the canal.
Decades passed, and people arrived by car. The Beach Strip was busy and other rides came along, like the Wild Mouse, Octopus, Tilt-A-Wheel. And, a 1916 Allan Herschell #1 Special carousel, with 36 gorgeous horses of wood.
It had started out at Springbank Park in London, but arrived in Hamilton by the 1940s.
But then they built the Skyway, and traffic declined on Beach Boulevard. In the late '50s, the carousel went into storage.
Years later, a band of citizens just over the border in North Tonawanda were looking for an old carousel. That community is where the Herschell carousels were made, and yet they no longer had one for themselves.
They located the Beach Strip's mothballed beauty. The group knocked on doors, raised funds and got the carousel for $55,000 in 1982. Then the restoration began.
You can see and ride this machine at the Herschell factory museum. (carrouselmuseum.net) It's on the National Register of Historic Places and just $5 to wander the very buildings where the magic was made, and to jump on the horse of your choice.
We do that right away. Alex Buncy, 76, volunteer and big-band leader, gives us a good ride. As we spin, he's pumping out the old band-organ music by Wurlitzer — which, by the way, was also based in North Tonawanda.

"This carousel is a time machine," Alex says. It stirs memories in old riders, and makes fresh ones for the young.

Ian Seppala is the museum's education director. He's just 27, but knows his history. Carousels, he explains, were for adults in the early days. From a museum info board: "When travelling carousels came to town, local officials and clergy would urge the populace not to waste their money ($.02 per ride) on something that could endanger their lives and corrupt their morals."

The museum has an 1895 miniature steam locomotive that once went round and round in La Salle Park. And there are cars from Crystal Beach's long-gone Little Dipper. Both rides were made at this factory.

But that carousel, with its hand-carved herd and 588 lights, is the main attraction. "It's what brings people here," Ian says, "and brings them back."

Two dozen of the horses are actually older than 1916, with real horsehair tails, friendly "County Fair" faces, and ears that stand up. On the newer outside row, they swept the ears back, less likely to break.

And all those horses were made right at the shop, of basswood or yellow poplar. Apprentices did the legs, journeymen crafted the bodies, and master carvers were entrusted with the heads.

A complete eight-ton carousel like this, equipped with a Canadian-Westinghouse-of-Hamilton 15-horsepower engine, would be packed into 88 boxes and shipped by rail to some faraway park.

A carousel might be considered an expensive frill for our waterfront. But it's not wrong to wish that another vintage memory maker with painted horses and music and lights could one day come down the tracks to Hamilton.

I stopped by to get a few pictures of our old carrousel in North Tonawanda, it was well worth the trip. I had a hard time trying to remember if everything was same as it was 45 years ago. I was told the only real change was the old Westinghouse motor was replaced but was still there on the side. A few knuckles and a ring gear were replaced as well with identical parts.
Many thanks to the staff at the museum for all their assistance.


"All photographs were taken and used with the expressed permission of the Herschell Carrousel Factory Museum, 180 Thompson Street, North Tonawanda NY 14120" Just a couple more pictures from the day but not from our old amusement park, first pictures is the tokens that you can purchase at the gift shop for a ride on the carrousel. And the other item that caught my attention was the "Catch the Brass Ring" which is something I have never seen before.
Post below is the arm;

This ring arm would historically be mounted on a post near the carrousel and would extend toward the riders. As you rode near the arm, you would try to pull the ring out from the end of the arm.
Most of the rings were steel, but a few were brass. You would toss the steel rings into a clown's mouth or other target just beyond the ring arm.
A brass ring would give you a free ride. Thus, the positive connotation to the expression "Catch a Brass Ring".
Insurance companies have prohibited the use of the ring arm on most carrousels.