This photo was sent in today some duck hunters transiting the canal, not the best picture and maybe we can get a better one. A flock of Northern Pin Tail ducks swoop across the surface of Lake Ontario just off shore along Beach Road about a mile west of the Burlington Canal Saturday morning as a group of duck hunters in a boat keep a look out for possible targets. Local Beach Strip residents say they have seldom seen duck hunters in this area of the lake but Hamilton police advise that the hunters do have permits. - Cathie Coward , The Hamilton Spectator 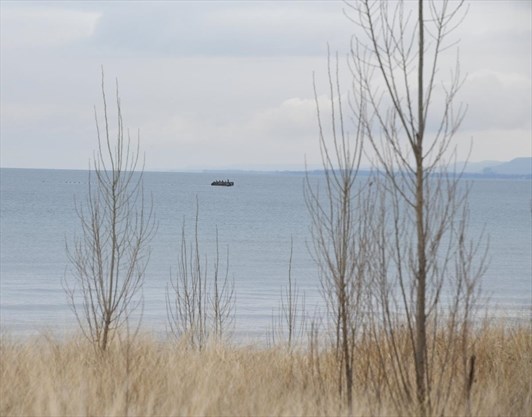 A boat with a group of duck hunters is visible along the Lake Ontario shoreline just off shore along Beach Road about a mile west of the Burlington Canal Saturday morning. - Cathie Coward , The Hamilton Spectator


In case you didn't hear the gun shots reverberating off Lake Ontario on the Beach Strip, it's duck-hunting season.
Area resident Greg Hampson came to learn this as he walked his west highland terrier, Maggie, along the shore Saturday morning.
Hampson said he heard five or so shots out on the lake around 8:30 a.m. before calling police.

It wasn't exactly water off a duck's back for Maggie, either. "My dog was going crazy."
A small motor boat covered in camouflage was on the water about half a mile out, he estimates. Decoys were floating nearby.
"In 25 years, I've never seen anybody come down here and shoot."
But Hampson said a police officer told him there was no foul fowl play going on.
"I said 'I hope they're not shooting toward land, because it scares me.'"
East end Staff Sgt. Dave Pidgeon confirmed the hunters had proper permits for waterfowl season.
Pidgeon said the boaters set out from the bay front before heading to the open lake.
"It's perfectly legal for them to do it."
Hampson said it "makes no sense" to allow shooting that close to the beach.
Pidgeon said most hunters are law abiding and trained in firearms.
He added the shooters are likely using pellets, which don't travel as far as slugs.
In southern Ontario, it's open season for ducks from Sept. 28 to Jan. 11, according to the federal government's website.
To shoot ducks, a person must have a valid migratory game bird hunting permit with a Canadian wildlife habitat conservation stamp on it.
An outdoors card and small game licence are also required.

Hunters must use non-toxic shot when sniping for migratory game birds. They aren't allowed to shoot a bird from a moving boat.

They were back out in the lake today, a couple miles out and also stopped in the harbour, I didn't see them shoot anything.