To some, he was a steelmaker, an alderman and gridiron star. But to others, Reg Wheeler was simply “Mr. Hamilton.”

Wheeler died after a prolonged illness Sunday morning. He was 93.

“He had a pretty darn decent life,” said Wheeler’s son Len. “We’ll miss him, alright, but we could see the signs coming.”

Born in Hamilton in 1918, Wheeler was well-known at Dofasco, where he worked 46 years, and as a defensive tackle for the pre-Tiger-Cats Flying Wildcat Football Club.

“He never told anyone how good a football player he was, and he was really, really good,” said his son.

He was also a “decent, passionate guy for Hamilton – easygoing, easy to get along with,” said Mayor Bob Bratina, whose father was a longtime friend and co-worker of the local football giant.

Later, Bratina would get to know him closely while hosting the Canadian Football League’s annual Hall of Fame induction dinner. And Reg, who was a member induction committee and crucial to the hall’s establishment, couldn’t resist getting in his share of political jabs.

“The only thing we disagreed on was the Red Hill Creek Express,” Bratina recalled. “I remember him giving me heck all the time for it.”

It was in the wake of his football career that Wheeler caught the political bug. He ran unsuccessfully for Wentworth County Member of Parliament in the 1950s, but in 1960 was elected east-end alderman – a post he held for a cumulative 28 years.

“He was a veteran councillor when I arrived as a kid,” said former regional chairman Terry Cooke. “I got to know him well and just have a ton of respect and admiration for him. He was maybe the best mayor we never had.”

Wheeler was always renowned as “fiercely independent” and “unable to be lobbied,” added Cooke, now CEO of the Hamilton Community Foundation.

“He was always seen as very much the elder statesman and in some ways the moral leader of council throughout most of time I served.”

As a Beach Strip resident, Wheeler was also a voice for those on the harbourfront. And as chair of the city’s engineering committee, he pushed for the construction of the Burlington Street overpass, new bridges and other important projects, such as restoration of Dundurn Castle.

Into his 80s, Wheeler remained active in community affairs, sitting on advisory committees for St. Joseph’s Health Care, Third Sector Recycling, Hamilton East Kiwanis Club and the Probus Club. In 2001, he was inducted into Hamilton’s Gallery of Distinction and in 2006, was one of 12 finalists for Greatest Hamiltonian.

Wheeler leaved behind his son Len, daughter Renee, 10 grandchildren and one great-grandchild. He was predeceased by his wife Grace, in 2007, and his son Bob.

With files from the Hamilton Public Library


Attached are the only two pictures I have of Reg, thanks to the Hamilton Spectator
905-526-3368 | @TeriatTheSpec

“Reg was a long-time member of Council and a Dofasco employee. He and my father were close friends from Dofasco and football fans. Reg played with the Wildcats in the pre-Tiger Cat era and was involved with the Football Hall of Fame.”

Born in Hamilton in 1918, Wheeler's influence on Hamilton's civic and cultural life stretches back more than five decades.

A former pre-defensive tackle for Hamilton's Flying Wildcat Football Club, a pre-cursor to the Hamilton Tiger Cats, Wheeler was a longtime employee of Dofasco, where he worked as a foreman on the ingot floor for 46 years.

Reg Wheeler might well be called “Mr. Hamilton” given his participation in such well-known Hamilton pursuits such as playing football and making steel. But he would also earn the title for his passionate advocacy for the city itself, and most particularly, for the residents of its north end.

Reg was born in Hamilton in 1918 and attended Ryerson Public and Westdale Secondary schools. His athletic prowess became evident in high school where he excelled at both rowing and football. But football became his main focus when local sports entrepreneur Sam Manson urged him to join the Flying Wildcat Football Club (a forerunner to the Tiger Cats), where he played defensive tackle. Reg claims his “fists of steel” prevented opponents from fouling him more than once. In 1938 Reg joined Dofasco where he worked as a melter on furnaces and on the open hearth.

Reg caught the political bug in the 1950s when he ran unsuccessfully for Member of Parliament for Wentworth County. In 1960 he was elected as the city’s east-end alderman – a ward he held until 1985 and again from 1988 to 1991. He was a member of the first regional council and, as chair of the Engineering Committee, pushed for the construction of the Burlington Street overpass, new bridges at the west entrance of the city and other important structural projects. A proud resident of the Beach Strip since 1941, Reg made it his mission to speak up for Hamilton’s harbourfront residents on issues that affected them.

Reg maintains an active presence in community affairs, including advisory committees for St. Joseph’s Health Care, Third Sector Recycling, Hamilton East Kiwanis Club and the Probus Club, and is chair of the Induction Dinner Committee for the Football Hall of Fame. Reg and his wife Grace have three children and 10 grandchildren.

I am a little late on this one but I was waiting on permission to use the photo;
Reg Wheeler memory lives on after the re-naming a Beach park in his honour, last August Reg's grandchildren were on hand to be the first to see the new sign. 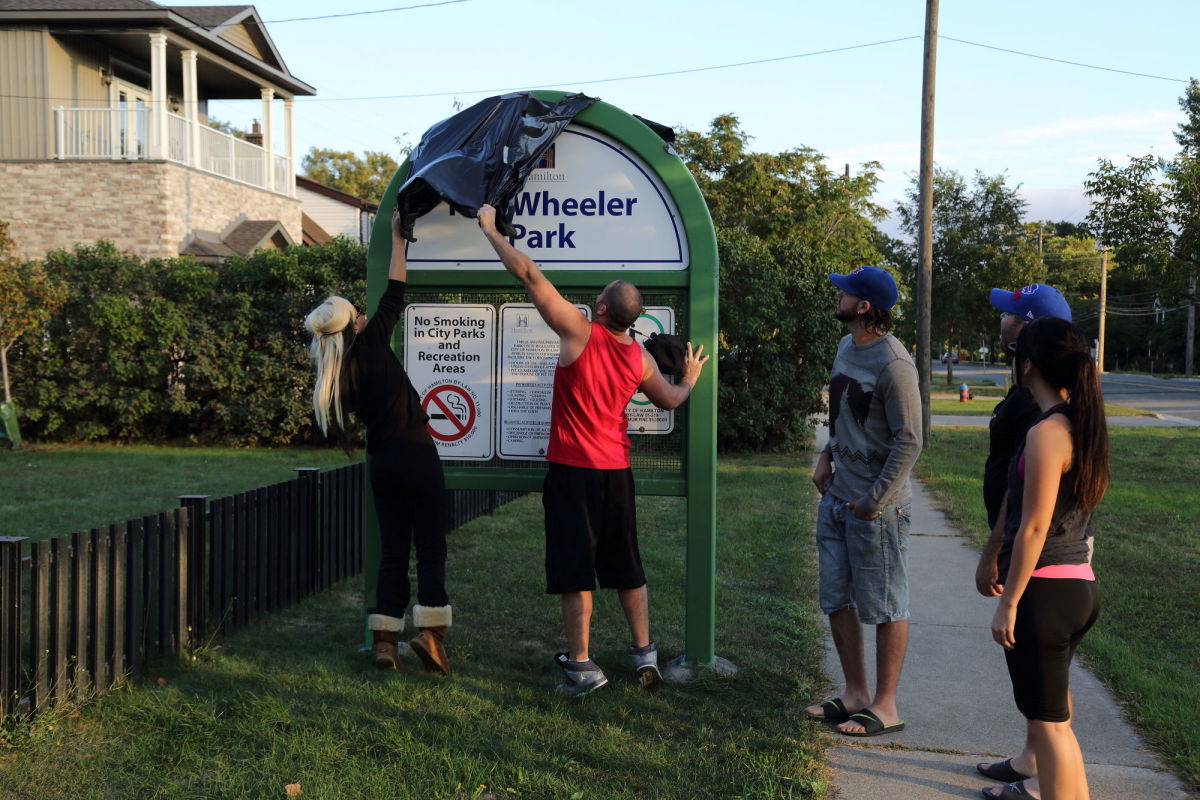 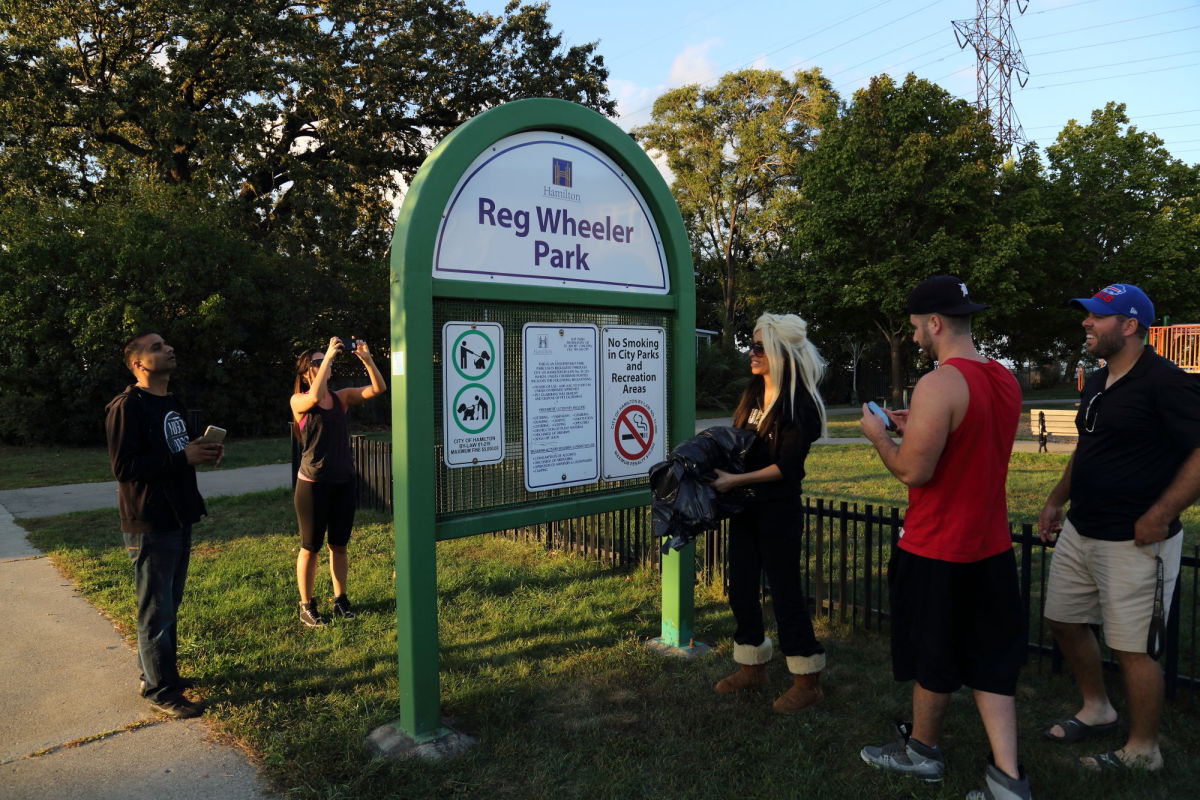