A medium-sized rock with an inconspicuous plaque at the entrance to Wild Waterworks is all that reminds visitors to Confederation Beach Park that it wouldn’t have existed without the determination of resident Jennie Florence Parker.

Ward 5 Coun. Chad Collins has proposed the city commemorate Parker’s crucial involvement in getting the municipality, and provincial and federal governments, to create what is now the Confederation Beach Park.

“This is something that has always bothered me as a park user,” said Collins, during the facility naming sub-committee’s May 27 meeting.


He said in front of the park’s wave pool, a rock lays on the ground with a “very small” plaque identifying Mrs. Stanley Parker for identifying the idea to create a waterfront park and “taking a leadership role” in developing the idea.

The plaque, which was dedicated on Aug. 15, 1967, states that “Mrs. Stanley Parker” suggested that “Lakeshore Park should be developed in this area…” The proposal was brought to council and ultimately to the attention of the provincial and federal governments.

Collins said even Jennie Parker’s name was hidden from public view, with her husband’s name identified as the person who proposed the waterfront park.

“It was the time (when) her husband’s name was on that plaque,” said Collins. “So I think it is only fitting in light of all of the joy that Hamiltonians have experienced over the years with Confederation Park we recognize Jennie Parker for her contributions.”

Collins said Parker, who was president of the Women’s Club, passed her idea to create a waterfront park to council, which was then taken up by Alderman John Munro and Mayor Lloyd Jackson. They eventually took the idea to other levels of government.

Munro said at the time the idea is “a wonderful thing for the people of the city, especially those who are unable to get away during the hot weather.”

The City of Hamilton assumed responsibility for the beach south of the canal in about 1957. In 1958 the remainder of Van Wagner’s and Crescent beaches were expropriated to create Confederation Park, creating what is now a 93-hectare public space. An official ceremony opening the park was held in 1964.

The park landscape is now connected by the Hamilton Beach Trail providing access for pedestrians, cyclists and in-line skaters. The many amenities include Lakeland Centre and Pool, Hutch’s Restaurant, Barangas’ On the Beach Restaurant, a picnic area and Wild Water Works. It is estimated close to 200 people an hour use the trail or about 2,200 people per day.

In 2019 the city began construction on what is a $40-million multi-year plan to redevelop the park that will include Hamilton’s first regulation cricket field, a multi-use sports field, 12 outdoor pickleball courts, a field house and more.

“The result is the park we have today,” said Collins. “This idea emanated from Jennie whose name is not on that plaque.”

Since the new sports complex in Confederation Beach Park is scheduled to open in 2021 on the former RV campground, Collins is proposing to name the facility in honour of Parker to recognize her contribution to the creation and development of the park.

“I thought with the park opening at the campground this year it would be fitting to attach her name to it,” said Collins. “More than a little plaque on the rock in front of Wild Waterworks.”

The sub-committee agreed to investigate Parker’s involvement in the green space, including contacting any family members for approval to eventually recommend her name be placed on the sports complex. 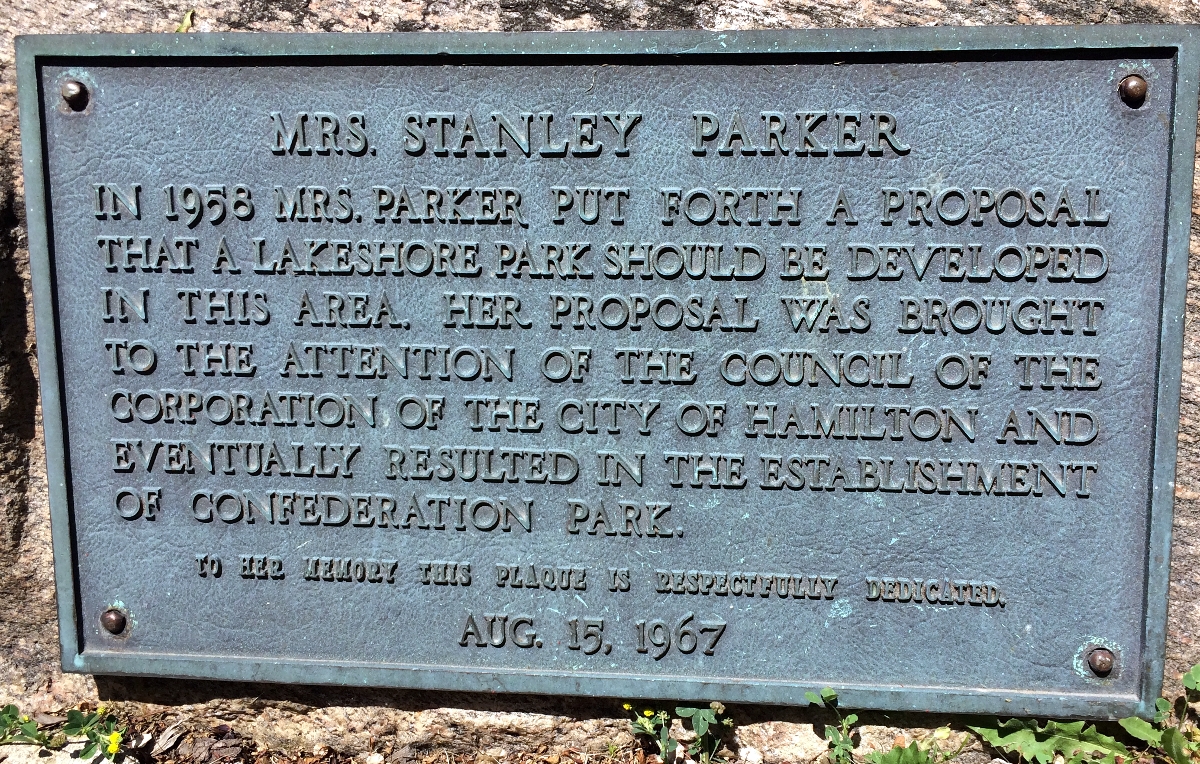