David O'Reilly said:
You pointed out on the Hydro Wires thread, that Dorothy Turcotte refers to a powerhouse at the south end of the beach. And I asked the question, but not very clearly, if prior to the shore infill, if the powerhouse built by (the Cataract CO.) could have originally been on the south end of the beach. Does this map answer the question?

http://hamiltonbeachcommunity.com/forum/threads/hamilton-shoreline-infill-map.1847/
Click to expand...
The map clearly shows where the power house is and it is named Dominion Power, it was located across the harbour from the south end of the Beach. Dorothy's book makes it a bit confusing, she states that the power plant dominated the landscape on the bay at the lower end of the Beach, but goes on the say that the plant powered the radial line and Burlington. She is confusing the two plants. She also states that the plant was demolished in 1930, the map states the 1940's and the picture I have shows it there in 1943. I haven't seen any history showing what this plant did power, but there was some big manufacturing companies in the area including Firestone which was built directly behind the power plant and Steel Car was also close.

Attached is a picture from Dorothy Turcotte's book showing the Dominion Power and Transmission plant, notice the plant has two stacks, the Burlington Beach plant only had one. 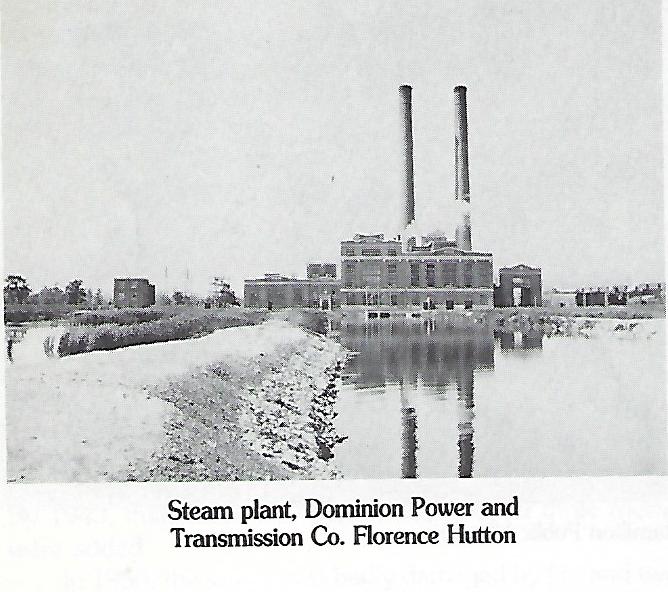 Outdoor Switching Station at Bartonville for Controlling the High Tension Circuits Leading from DeCew Falls to Hamilton Brantford Dundas and Oakville THE Dominion Power & Transmission Company of Hamilton Ontario owns one of the most economical and valuable hydroelectric plants in Canada that at DeCew Falls in the Province of Ontario The greater part of the energy wrested from the waters of the Welland Canal at that point is transmitted to the Electric City of Canada more generally known as Hamilton the enterprising manufacturing city of over 70,000 inhabitants on Lake Ontario about midway between Niagara Falls and Toronto The electrical development at DeCew Falls was described in these columns some years ago but in order to render what follows more intelligible a brief account of the development is given The Dominion Power & Transmission Company controls the following properties Hamilton Cataract Power Light & Traction Company Ltd of Hamilton, Hamilton Electric Light & Power Company Ltd of Hamilton, Dundas Electric Company Ltd of Dundas, Lincoln Electric Light & Power Company Ltd of St Catharines, Western Counties Electric Company of Brantford, Welland Electrical Company Ltd of Welland, Hamilton Street Railway of Hamilton, Hamilton & Dundas Railway Company of Hamilton, Hamilton Radial Electric Railway Company of Hamilton, Hamilton Grimsby & Beamsville Electric Railway Company of Hamilton, Brantford & Hamilton Electric Railway Company of Hamilton and the Hamilton Terminal Company Ltd of Hamilton. The generating stations comprise the main hydroelectric station at DeCew Falls two hydroelectric plants of 600 kw and 200 kw respectively at Brantford and St Catharines and two steam stations of 2800 kw and 300 kw respectively at Hamilton and Brantford. At present the station at DeCew Falls is capable of carrying a steady load of 28,800 kw and a peak load of 36.000 kw and during the year the company will install another 6400 kw 2400 volt generator and a 7100 hp Voith turbine. The power at DeCew Falls is derived from the precipitous change of level between Lake Erie and Lake Ontario formed by the Niagara escapement. The water is diverted from the Welland Canal at the Lake Erie level into a large storage basin of some 500 acres in extent. This reservoir forms a Perfectly quiescent lake which in the winter time freezes over and eliminates the very serious difficulties which water power Plants have in those latitudes with floating and anchor ice. All of the plants at Niagara Falls suffering more or less during course of each winter. From interruptions of this character the and indeed from any interruptions whatever from hydraulic causes the company has been entirely free during its whole history. The water leaving the reservoir plunges through steel penstocks 940 feet long against turbine wheels in the hydraulic station. The impulse wheels are approximately 20 feet above the level of Lake Ontario. The water charges against them under a static head of 269 ft or 120 ft greater than at Niagara Falls and is then returned to the Welland Canal at the Ontario level The physical conditions at DeCew Falls where the power house is situated are very much in favor of the development of power no very extensive engineering work or tunneling being necessary the company's penstocks merely being laid down a natural grade on the hill and connected to the turbines The tailrace is natural being what is known as the Twelve Mile Creek and required no dredging or development As a result of this the cost of developing electricity per unit is probably as low as if not lower than that of any plant in America. The energy generated is transmitted to Hamilton a distance of thirty five miles and the neighboring cities towns and villages and besides supplying the needs of the light and power companies at these places supplies the energy to operate a network of electric railways that tap the entire country round about Hamilton for a radius of thirty to forty miles.