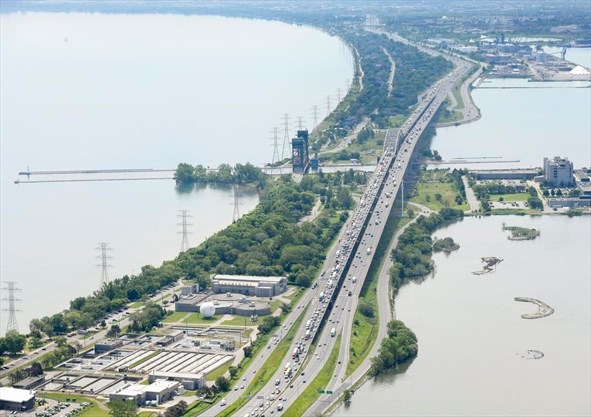 Commuter traffic is making the Skyway Bridge an increasingly taxing route to get to the GTA from Niagara. Jason Goemans argues it’s time to seriously consider a toll tunnel as an alternative. - Gary Yokoyama , The Hamilton Spectator file photo

I'm one of some 150,000 commuters who use the Burlington Bay James Allen Skyway bridge daily, a number increasing yearly thanks to continued growth in Niagara region.
Bad weather, accidents, construction and congestion add 10 to 15 minutes each way in rush hour from Fairview Street in Burlington to Fruitland Road in Stoney Creek. That's 80 hours per person per year of wasted time — two full weeks of work.
In fact, it usually takes me more time to get over the bridge than it does getting to Brampton from Burlington on Highway 407. Highway 403 from West Hamilton through Aldershot isn't much better.

Using the Eastport bridge is a crapshoot as there's no way to know if the bridge is up or down. Annoyingly, no one has thought to provide a two-word "bridge up or down" message on the digital overhead signs, which instead suggest travel time to Mississauga.
Meanwhile, why can't the Port Authority and city collaborate to restrict boat traffic through the canal passage during peak road traffic hours? Surely this wouldn't be overly disruptive to the few ships that pass through daily.
Designating a carpool lane would be fraught with issues such as enforcement, and ironically lead to further congestion. Various attempts to run a commercially viable rapid ferry system have failed, and the construction of a new super highway from Fort Erie to Highway 401 isn't likely any time soon.
But what if there was another option — a tunnel. The idea may sound crazy, but the region actually considered building a tunnel back in the 1950s instead of a bridge. Cost and budget considerations favoured the bridge.
Why not construct a four-lane (plus possible Go-train option) toll-tunnel 40 feet under the canal that spans the approximate 10-kilometre stretch from Stoney Creek to Burlington?
Determining the entrance on the south side between, say, Grays Road and Woodward Avenue and exit near Fairview and Brant streets on the north side would be a challenge in itself — but the point is it's possible.
And it would certainly be more feasible and less challenging than the 50-kilometre Chunnel that France and England successfully engineered below the ocean floor.
There have been notable technological improvements over the past two decades to reduce the per-foot cost of tunnel construction. Aside from that the environmental impact, it would also be quite positive given carbon emissions from millions of hours of idling vehicles would be eliminated every year.

It would no doubt require a private-public partnership and investment from all three levels of government, but the economic impact could ultimately be fantastic. I'm sure there's a way to calculate the dollar impact the current chronic congestion drains from the billions' worth of trade travelling the QEW corridor every year.

Quick math suggests if a $3-4 toll was collected each way with only a 20 per cent participation rate (based on today's usage), it could generate $60-80 million annually in revenue.
That would go a long way toward paying back a billion-dollar-plus investment.
I would be happy to spend $6 a day to save a half an hour of my time along with less stress and aggravation. I could also argue it would be a safer commute if not a more environmentally friendly alternative.
I accept the likelihood of seeing this project come to fruition in my lifetime is next to zero, but it doesn't mean we shouldn't seriously start considering what this commute over the bridge will look like in five, 10 or even 20 years from now. Given Ford's recent decision to cancel the LRT project, why not utilize that initial billion-dollar infrastructure commitment to alleviate the massive congestion choking what is arguably Ontario's busiest transportation corridor?

Jason Goemans is vice-president of TG Appliance Group in Brampton.