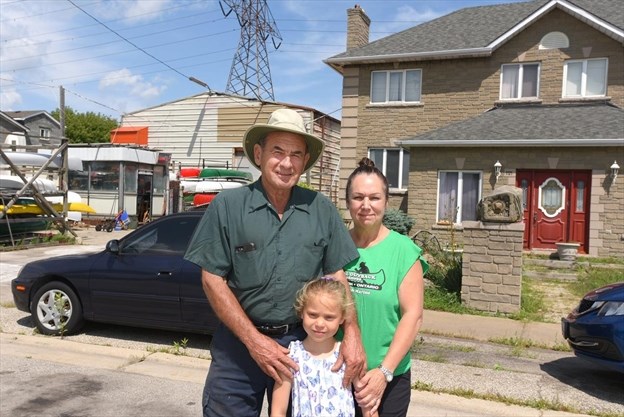 Real and Paulette in front of their home and business with their granddaughter Penelope. - Cathie Coward,The Hamilton Spectator 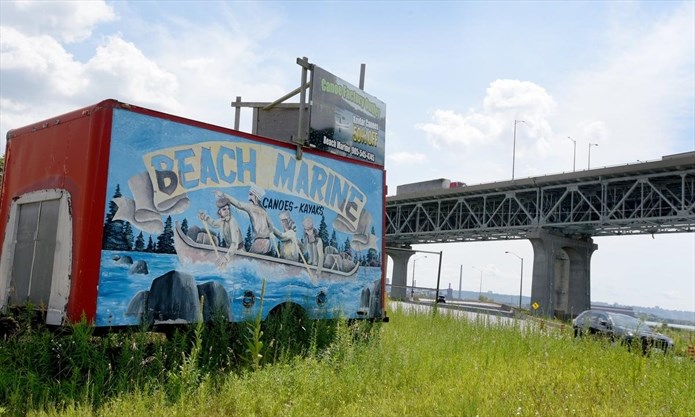 
Real Gendreau built a solid two-storey house on the Beach Strip in 1987, right beside his canoe business called Beach Marine.

Building canoes there was one thing. But living on the beach, in the shadow of the Skyway, where many homes were dilapidated, where the city had a plan to tear them all down?

"A lot of people thought I was crazy," Real says.

A few decades on, many want to live on the Beach. Fine new homes now sit on lots that were empty for years.

In fact, such is demand right now that Real's 2,800-square-foot home is going to fall. A new development there and on adjoining property calls for a row of 15 new townhouses. They will sell for $800,000 and up, complete with your own elevator.

Real, 69, has no part in this development. He's just selling the land, and he's moving on. They won't be making canoes anymore on the Beach.

In the beginning, on this land near the canal, there was Bert's Boats. But by 1978, Real had his own canoe manufacturing business there. That year happened to coincide with the end of the amusement park next door, with rides, bowling, a dance pavilion. The Skyway had not yet been twinned.

For a long time the city and the Hamilton Conservation Authority didn't think anyone should be living
on the three-kilometre spit of sand. There was a 10-year buying spree and they tore down nearly 170 homes, leaving empty, weedy lots.
But sentiments changed, and City Hall decided there was room for parks and people after all.

Then came the waterfront trail, right by Real's back door. That trail changed everything, he says. "People came down here and said, 'Gee, this is nice.'"
Real had arrived from a farm near Sherbrooke, Quebec, because there were jobs in Hamilton. He wasn't going to live in the city, but the Beach had wide open spaces enough for him.

Being bilingual helped him find an office job at Navistar, and he kept that until the early 2000s. But all the while, he was making those canoes — tens of thousands have come out of that small plant by the water over the years.
They're all made of strong, light Kevlar these days. Four colours — white, yellow, green and "Budweiser red." The 16-footer sells best, in red.
The canoes are sold through several dealers, which put on their own brand and sell them for up to $3,400. Sometimes you can pick up a scratched one at the Beach yard for half that. But come the fall, everything's scheduled to be cleared out.

Beach Canoe had a fire in 2017. There was some hydro work, a power surge, and a blaze that wiped out a lot of Real's inventory. "I was underinsured majorly," he says. The incident helped him realize it might be time for a change.

He has contended with a hernia, colon cancer, prostate cancer. Paulette McHugh, Real's wife of 20 years, works as hard as he does in the canoe business. She thought retirement was a great idea.

Real may not go all the way. He's already thinking of making canoes in some industrial mall in this area and selling them somewhere in cottage country.

But the new home has been purchased. Real and Paulette went looking for a little bungalow in the
country, and ended up with a two-storey, 3,200-square-footer on 90 acres in West Lincoln.
"I'll be able to dig stuff, cut stuff, play in the forest," Real says. Still, the change will be hard.

"From our bedroom on the second floor, we see the sunrise over the lake," he says. "And there are early-morning walks on the beach."

As for the house he built when few thought this water's edge was the place to be, he'd rather not think about that.

"I'm not going to be here to see it come down."

Paul Wilson's column appears in the Go section most Tuesdays.

Paul Wilson’s column appears in the Go section most Tuesdays.