There was hope that the falcons had some new hatchlings today, but that wasn't the case. Still sitting on the eggs. 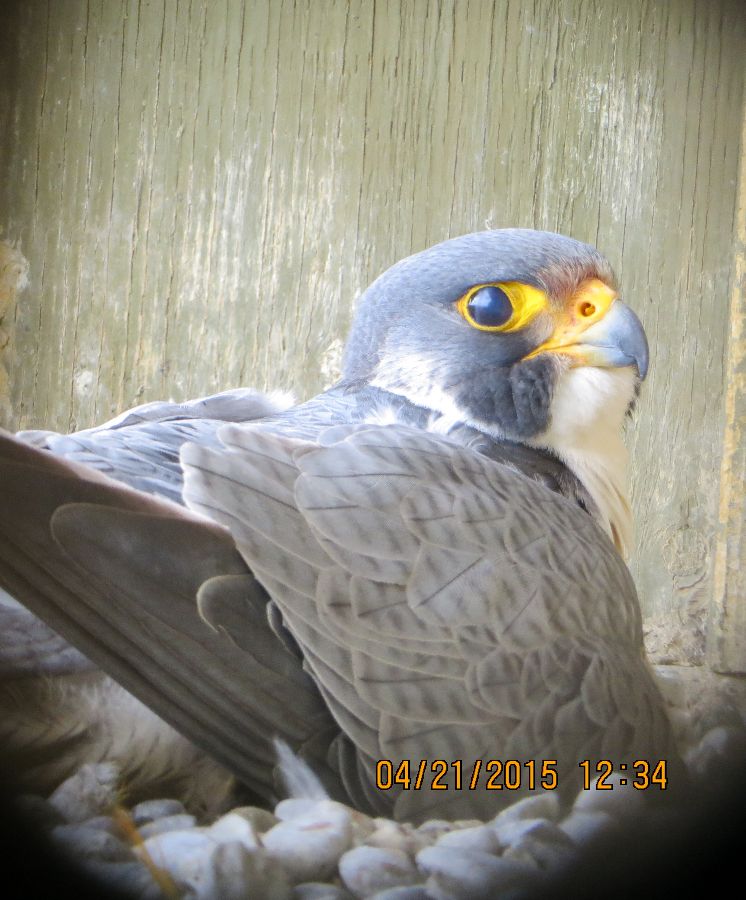 It shouldn't be much longer since Cirrus laid hers early as usual. They figure about May 14th to 20th range is when the downtown eggs hatch.

I recently learned there is another nest in a quarry in Stoney Creek.
Last edited: Apr 23, 2015

So that's three pairs in the area, bad news for the pigeons. The falcon experts believe the bridge eggs should hatch any day now.
S

The more nests the better to get those numbers back up. Such a beautiful bird they are.

Two new arrivals with two eggs still not hatched, must be only a day or two old.
Thanks to PWGSC

is that Cirrus or Mackenzie in the pic?

Sharla1 said:
is that Cirrus or Mackenzie in the pic?
Click to expand...
No idea, I can't tell them apart.
S

Anymore hatchings at the bridge nest? The eggs should be hatching anytime now downtown.

Sharla1 said:
Anymore hatchings at the bridge nest? The eggs should be hatching anytime now downtown.
Click to expand...
I haven't heard anymore on the progress, but according to the falcon Site, the banding isn't far off;

"May 14th - 2015
Just a quickly update on the banding schedule for Burlington. We have been able to book and secure a banding date of Monday May 25th at 11am.
Due to the ongoing bridge maintenance and all of the restricted and limited space around the bridge, its going to be a very quick process indeed.
We will post the any additional news and updates as its become available."
S

Sharla1 said:
Chick number2 has hatched downtown. Hopefully more to come.
Click to expand...
It looks like there are three little ones at the Lift Bridge, from the falcon Site;

Pretty good odds, our city producing 5 chicks for sure.

From the Falcon Site

May 25th - 2015
Todays banding went very well indeed despite the feisty attitude of the three young hatchlings! While this is only the third banding so far this season, these three hatchlings were just down and outright nasty with LOTS of attitude!! Actually, just the way we like to see them!!!

Just couldn’t have handled them without gloves!!! The two males weighed in at 676 grams and 666 grams, with the larger female weighing in at 975 grams!
So we have the female named Stella - banded K over 24 with Yellow Tape, Wellington banded B over 10 with Red Tape, and finally little Lucifer - banded B over 11 with Blue tape - (guess who weighted 666 grams)

While up in the tower, I was able to get another close look at the resident adult male, and was able to reconfirm his band number Black 29 over Y

Mark Nash from the falcon site sent us some pictures of the banding last Monday, thanks to Mark!

I was told that one of the hatchlings was missing a claw but I don't see that reported anywhere on the falcon site, so we will have to wait and see if that proves correct.

There were 2 females at the downtown nest. McMaster and Barton.

Sharla1 said:
There were 2 females at the downtown nest. McMaster and Barton.
Click to expand...
I am told that two at the Bridge have already been returned to the nest. And they weren't too happy about the whole ordeal.
S

Any eggs yet Scotto? I think there is one at the downtown nest already.

Sharla1 said:
Any eggs yet Scotto? I think there is one at the downtown nest already.
Click to expand...
I don't know, there is a bunch of scaffolding that has been install since last time we had eggs. Hopefully it didn't scare the parents away.

We did have by this time last so it is worth a look.

Might have to start a new thread if there is.
S