From January 7/1985
This is an old Hamilton Spectator article on lighthouse keeper, Peter Coletti. 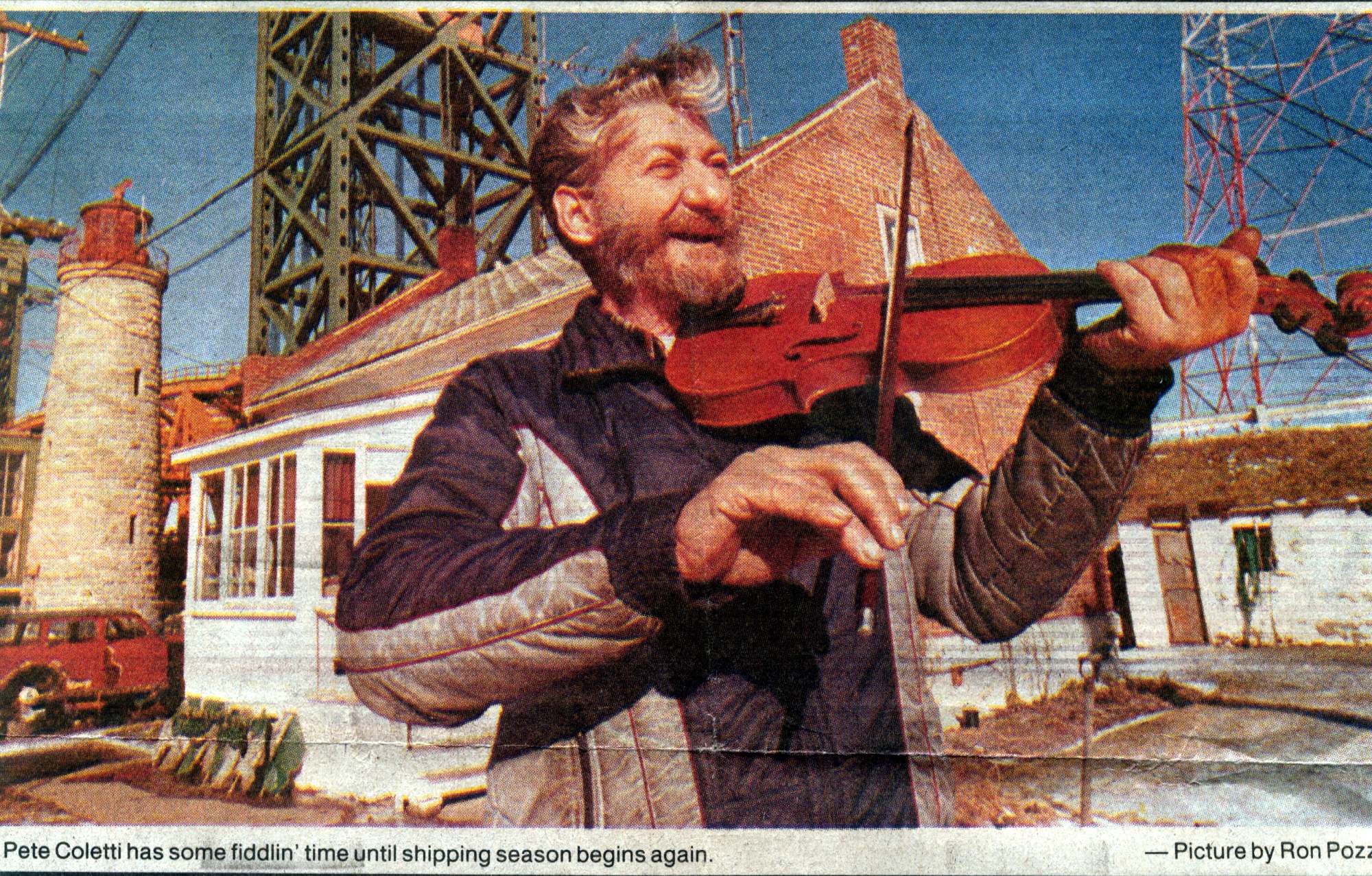 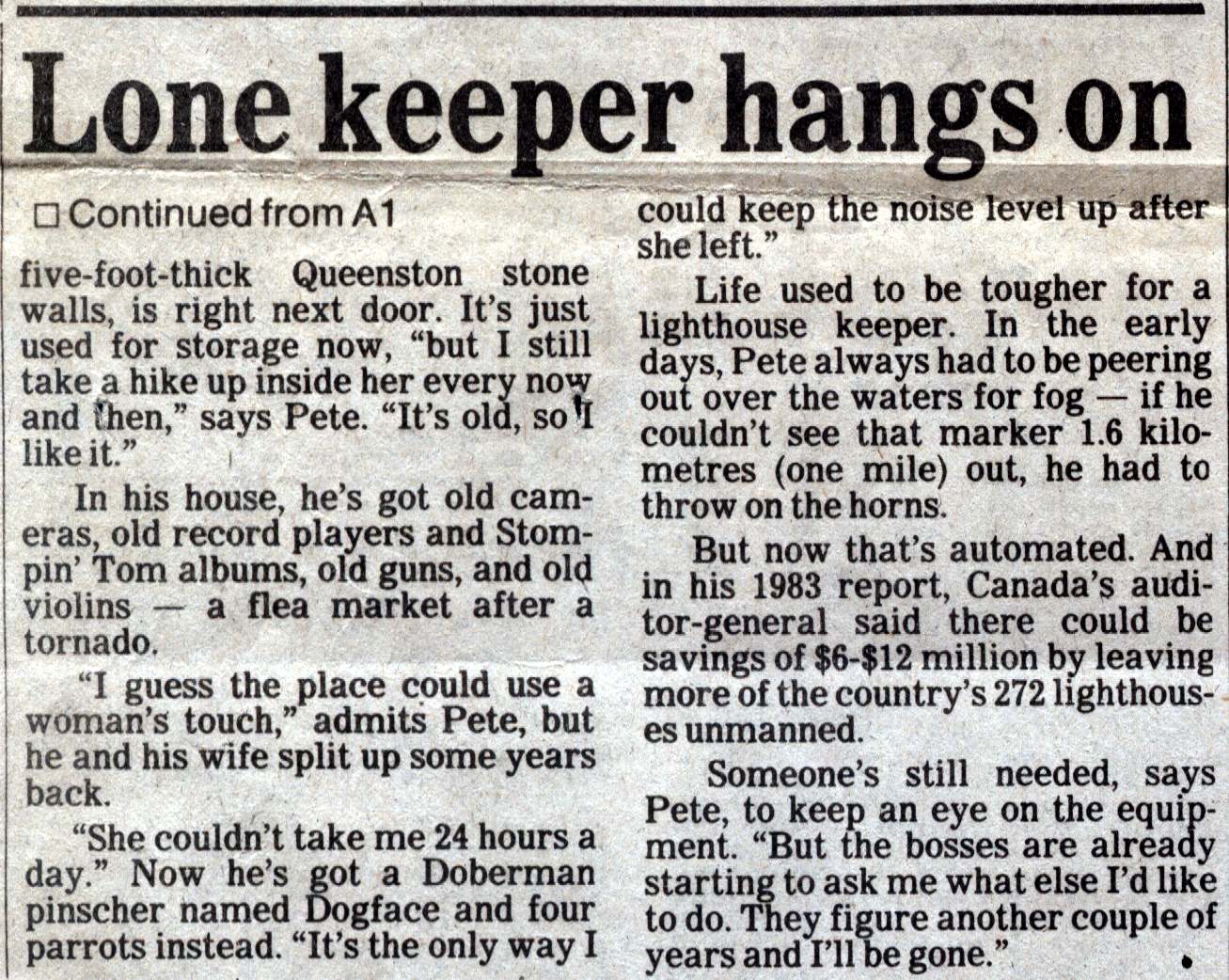 End of an Era

Another write up in the Hamilton Spectator for Peter, no date, but I would guess January 1987. 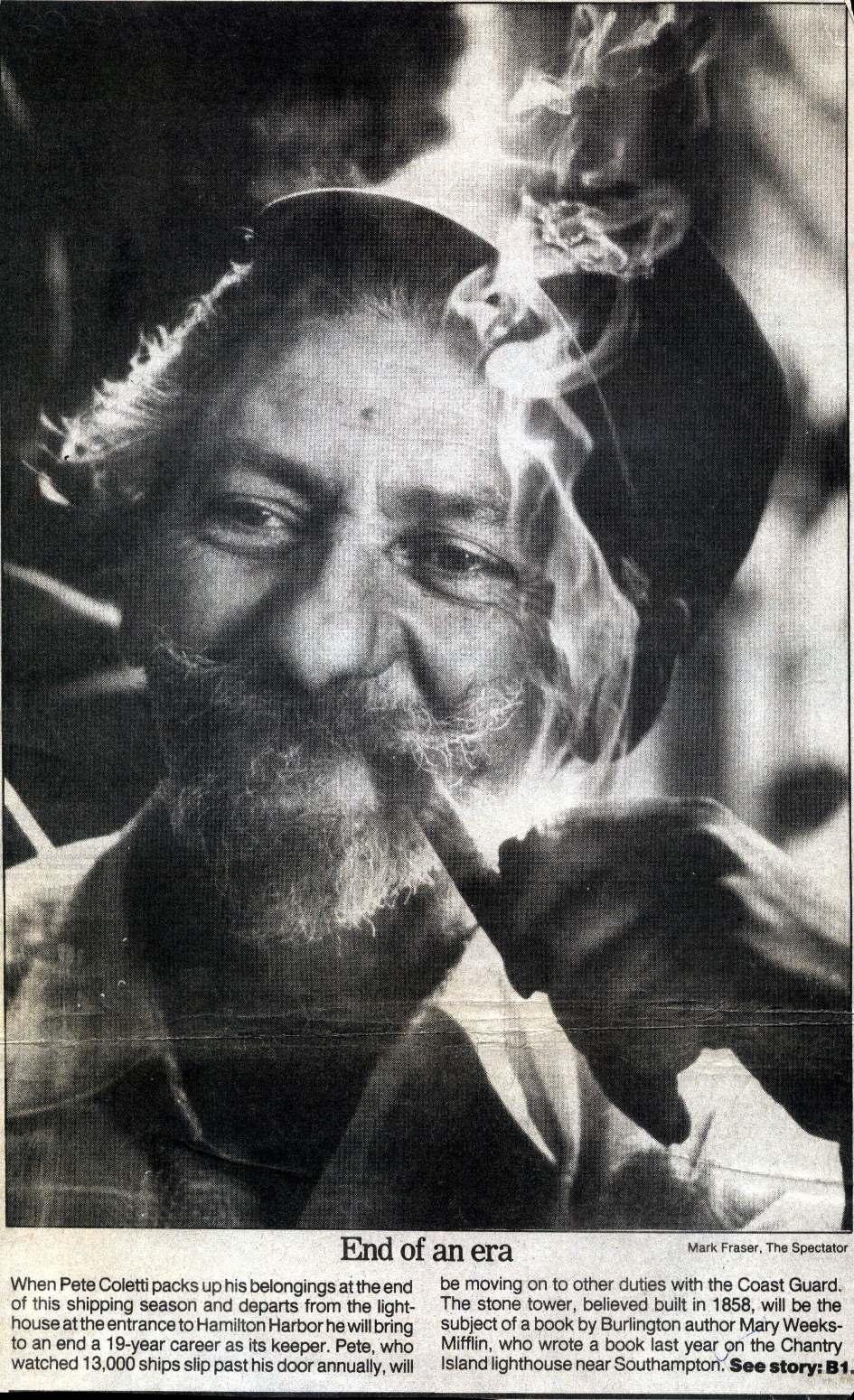 Pete Fights To Keep The Light

From the Hamilton Spectator, Pete's new job at Alcatraz. 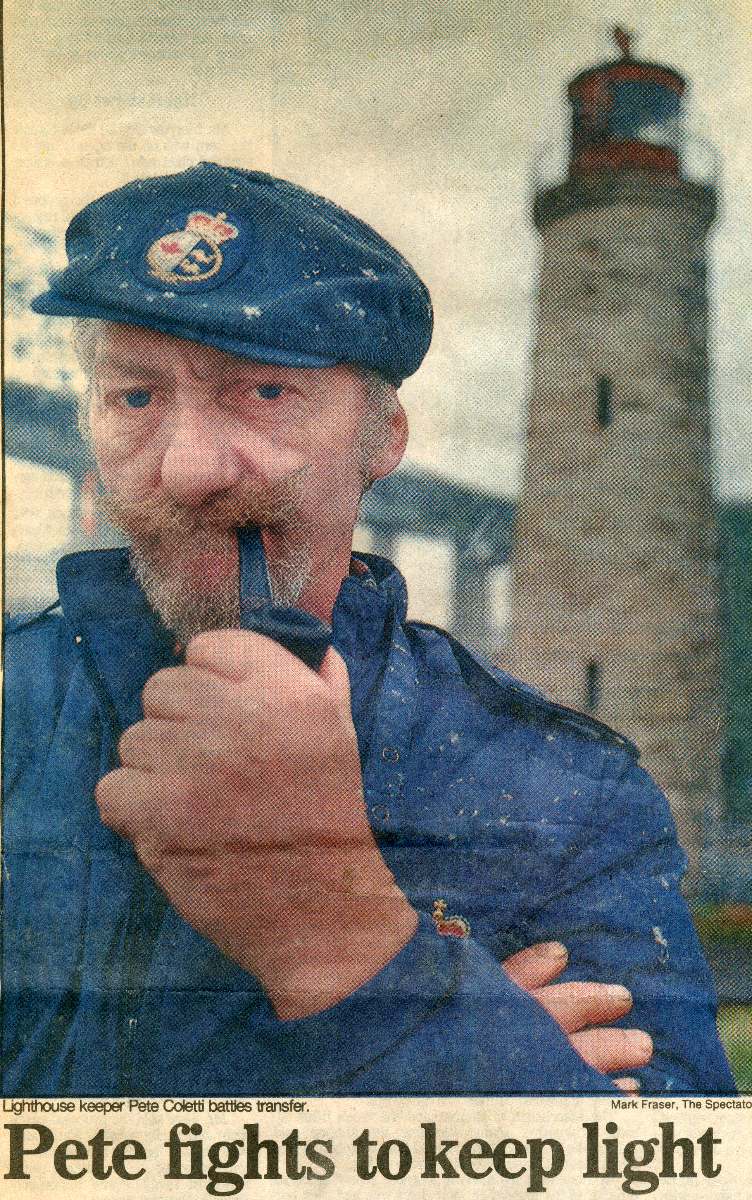 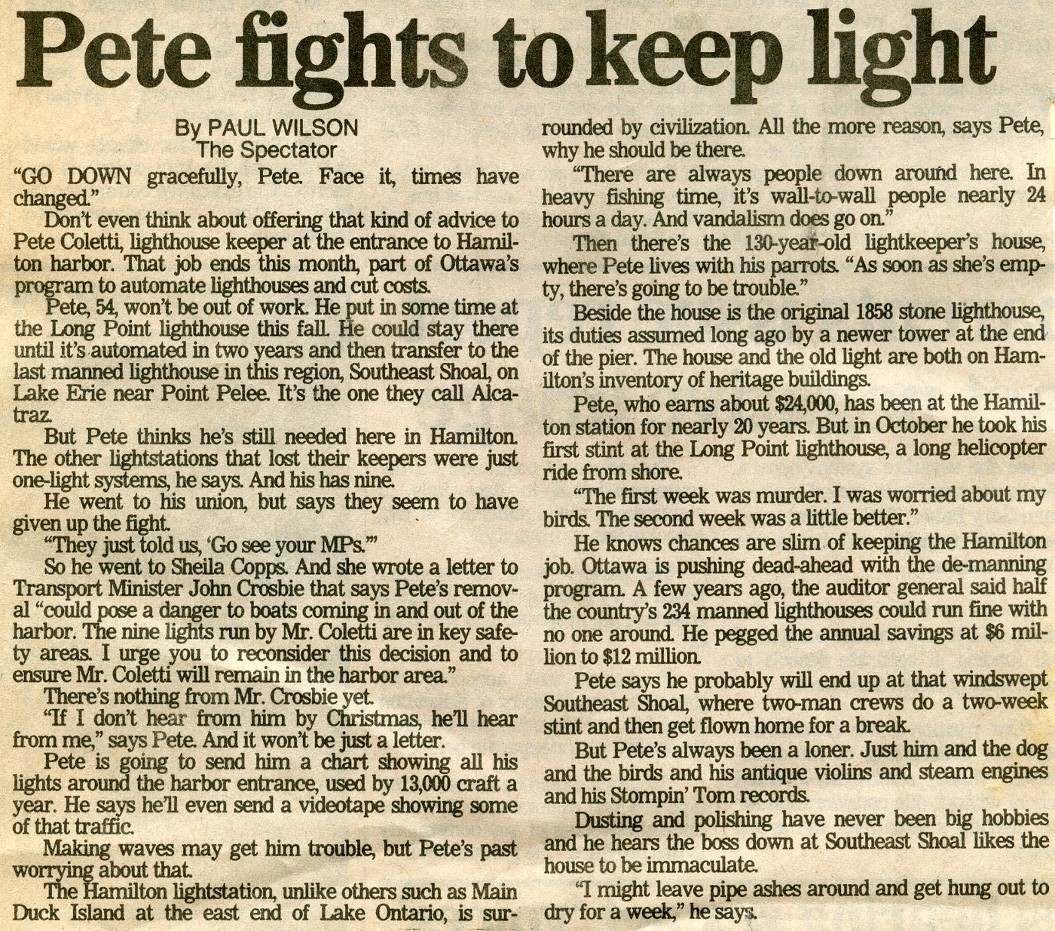 I was in the Maritimes during the past 2 weeks, and I made a point of visiting Peter Coletti at his home in Little Lepreau, New Brunswick. I videotaped an interview with Pete for my seemingly everlasting production on the history of Burlington/Hamilton Beach. Pete seems to be in good health and he's planning a trip to Hamilton Beach soon, probably around the end of this September. If the timing is right he may be a guest at the monthy meeting of the Beach Canal Lighthouse Group, who made him their first Honourary Member a few months ago.
I'll post more news about Pete when it's available.
Thanks for posting the various Spectator articles, Scotto!
Fred Briggs

Pete On The Rock

Fred Briggs said:
Thanks for posting the various Spectator articles, Scotto!
Click to expand...
You are welcome, here is one more. 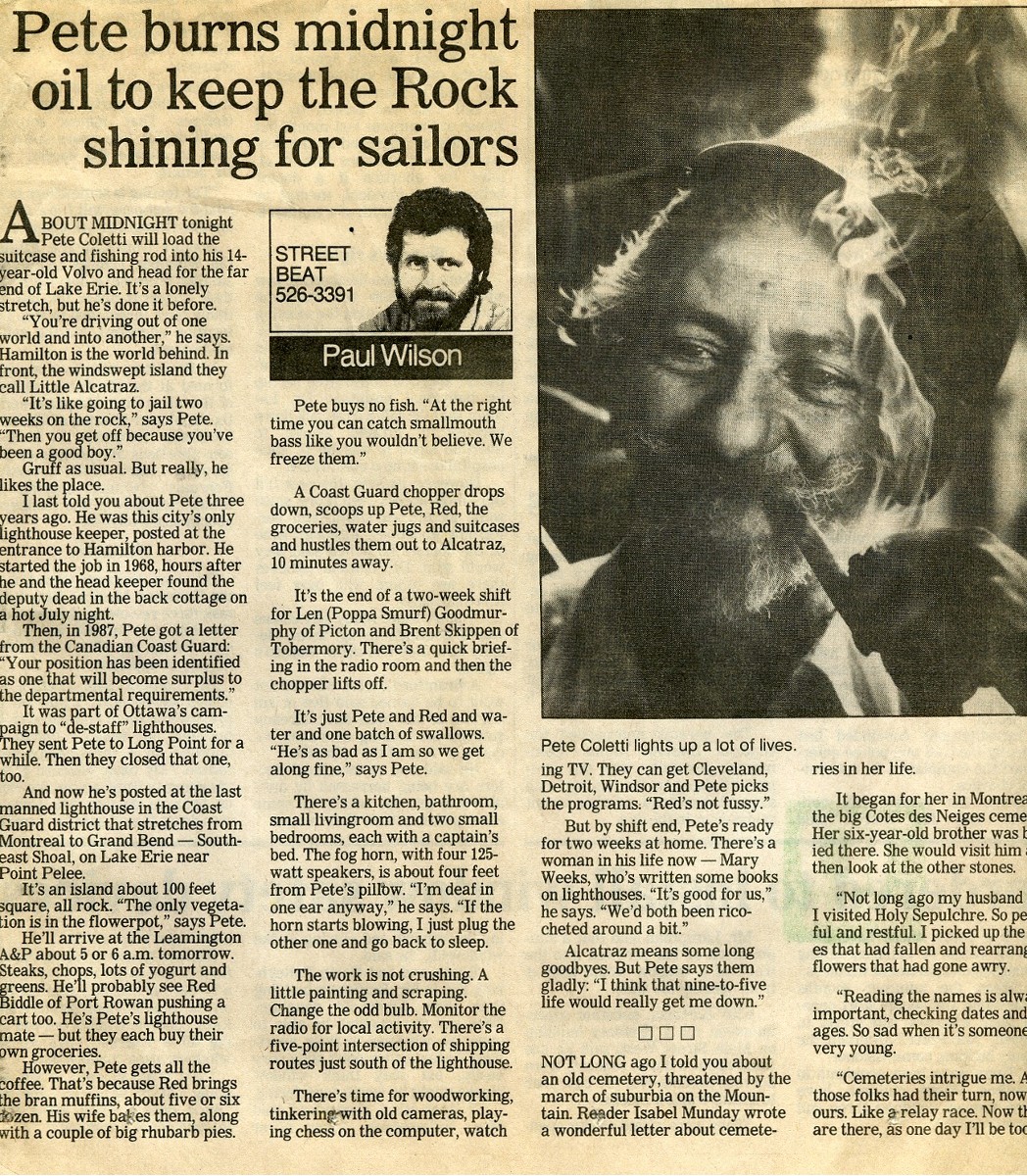 If anyone has Petes phone number, I would sure appreciate it..Pete was a good friend of my Dads..( Doug Collings )..
C

I tracked Pete down....spoke to him and his wife........ What a great website..things sure have changed since I left in 1969..I drove down the strip last summer - for the first time in almost 35 years..The jogging/walking/cycling path is a great improvement on the railway tracks that i used to walk on to Bell Cairn School...now-- if someone can get the darn Hydro towers removed that some short-sighted bureaucrat allowed to be built in the late 60's...My father had an airboat with an aircraft engine on it that we used to drive up and down the beach in the winter (lol..do ya THINK that would be allowed now?)..and he complained that the towers "made it more tricky".....

I don't think those hydro towers are going anywhere soon, anyway if you are talking to Peter, please say hi for me.
R

Northshore @ Francis in Burl. In Key West Fl for t

Collings said:
If anyone has Petes phone number, I would sure appreciate it..Pete was a good friend of my Dads..( Doug Collings )..
Click to expand...
Petes Phone number is
(Removed)

Tell him Rae said hello from Indian point Burl.
Click to expand...
Rae;
Thanks for the info, I will have to give him a call and I will say hello for you.
Thanks again, Scotto :tbu:
Last edited: May 14, 2020

Just an update, I talked with Peter today, he didn't say
much more than what has already been posted by Fred. He did give me his new e-mail though-
ppc@nb.sympatico.ca
Scotto
C

Collings said:
I talked with Pete and Dale on Xmas Eve...I hadn't talked to him since about 1985..so it was good to touch base with him......
Click to expand...
He didn't tell me her name was Dale.

Pete in the lighthouse at the end of SE pier, courtesy of the Hamilton Spectator Lol...when i phoned she answered..and she knew me from before she was with Pete,,,,,,I knew the previous Lighthouse keeper - the Gushulaks....

I received an email today stating that Pete Colletti passed away on March 17th, I hope to get more info on this.

I have passed this on to the Spec, hopefully they add a good write-up for Pete. Attached are a couple pictures of Pete.

A recent picture of Pete in front of his boat. 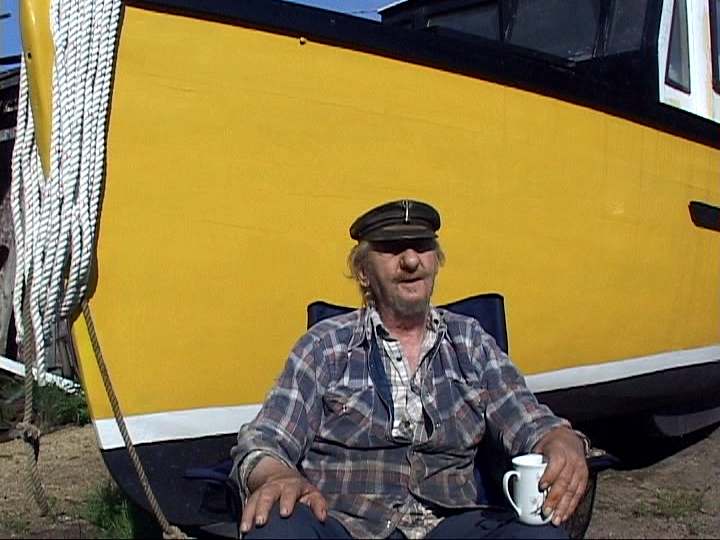 By Jon WellsSpectator Reporter
Thu., May 21, 2020
Hamilton’s last lighthouse keeper was big Pete Coletti, who had a pirate aura, parrots named Foghorn and Gasbag, and who spoke like a maritimer even though he had never been to the coast.
A link to a bygone era of the Beach Strip, Coletti died at 85 on March 17 in New Brunswick, where he had once manned the light on rugged Gannet Rock in the Bay of Fundy.
A loner, yet also a swashbuckling raconteur, Coletti started work at Hamilton’s lighthouse shortly after crossing a black cat and a dead body, in that order.

He was born June 23, 1935 and raised in Millgrove along with his sister, Lee, at the top of the hill off Highway 6 North, where their father sold vegetables.
While a natural storyteller, he rarely would talk about his childhood or parents.

Young Pete didn’t go to school past Grade 5. He was put to work. He taught himself to fix and build most anything, but it wasn’t until his 30s that he found his calling, down the hill, at the Head of the Lake.

He had no maritime roots, other than his father driving a speedboat running booze during prohibition in New York state.


“Then he came to Canada and in 1929 lost $350,000 overnight ... A woman and a crooked lawyer had a lot to do with it.”That was Pete Coletti, talking to The Spectator’s Paul Wilson, who delighted writing yarns about Hamilton’s “keeper of the light” with the incongruous accent (“everyone thinks I’m a Newfie”) who was always firing up hand-rolled cigarettes. In the early 1980s, there were 260 staffed lighthouses in Canada, before automation and cutbacks. Today, there are 51 staffed in Canada, and none in Ontario. Back in 1968, most of them had two workers, and that’s when Coletti started, alongside lighthouse keeper Mike Gushulak. Coletti took over the light in the early ‘70s and lived in the keeper’s cottage in the shadow of the Skyway 23 years. Steel City characters: A host of Hamilton’s colourful folk In the early days, he would peer out over Lake Ontario and flip the foghorns if necessary, but most of his time was spent caring for the equipment. Coletti offered Gushulak’s son, Mike Jr., the assistant job. For Mike Jr., who now lives near San Francisco, Coletti became the warm and safe male presence he had always lacked in his life. “Pete was like a father to me,” Mike Jr. writes in an email. “When I hear his name, or tell stories about him to my son, it puts a smile on my face.” He remembered the time Coletti spotted an abandoned sailboat wash up against the pier, and on the spot told Mike Jr. and his brother Bill to hop aboard, and the three of them rode through the canal. “That was the spirit Pete had,” writes Mike Jr. “And he scared the hell out of my brother when he edged the boat on its side.”Coletti married and had two daughters, Chris and Angie, who lived in the cottage along with his dogs, cats, budgies, parrots, a ferret and a dozen guppy-filled aquariums.By the late 1980s, with Hamilton’s light automated, Coletti commuted to Long Point on Lake Erie, where he kept the light on a spit of rock dubbed Little Alcatraz. By now divorced, he started living with a woman named Mary Weeks. They met when she interviewed him for a book she was writing on lighthouses. His voice mail greeting went: “This is Peter Peter the lighthouse keeper, and Mary the mermaid. ”In 1991, he moved with Mary to Little Lepreau, N.B. where he was lighthouse keeper on a tiny island accessible by a 20-minute chopper ride. His assistant was young and earnest Chris Mills, a perfect foil to Coletti’s weathered old salt.

“Pete descended like a hurricane on Gannet Rock, larger than life,” says Mills, who still lives on the ocean.“He was tall, and garrulous, and had a big deep voice; he was mostly deaf and that led him to speaker even louder ... And he was just a good-hearted man.” Mills marvelled at how Coletti could assemble everything from clocks and cameras to guns. Sometimes he’d find him filing the claws of a parrot on the kitchen table, barking at the bird to hold still.
The way Coletti talked in his folksy manner, it reminded Mills of an expression: “He decorated life. That’s what Pete did. He was one of a kind.”
The job was hard on Coletti’s relationship with Mary, who was alone for two weeks at a time when he was working. In 1993, she returned to Ontario and died of cancer soon after.
Years later, Coletti found love one more time, an old flame from his Hamilton days. She came to live with him, but in 2019, she, too, returned to Ontario and died of cancer.
“Dad told me it seemed like everyone in his life was leaving him and dying,” says his daughter, Chris Hurst.
In recent years, Coletti’s health was poor: his heart, lungs.
On March 16, Chris received an urgent call from a hospital in Saint John. She and her sister flew out the next day, driving through a snowstorm after landing.
They got there about 45 minutes after he had died.
They sat and talked to him.
“I held those big mitts he had for hands,” says Angie Coletti. “He was down to earth. Gentle. And funny.”
Chris has put some of his ashes in a lighthouse-themed urn. Angie plans to take her daughters to the lift bridge and sprinkle some there.

“I think he would love that,” says Angie. They plan to hold a celebration sometime this summer so beach friends can gather and tell Pete Coletti stories.
There remains a bit of mystery why Coletti was so drawn to the lighthouse.
Much has been written about their allure, as a symbol of calm in the storm, protection, and even illumination of the spirit.
“He was the best dad ever,” says Chris. “But it was difficult for anyone to really get close to his heart.”
Other mysteries, though, Coletti never tired of telling, in his baritone that boomed like a voice from a mist-shrouded past.
“I suppose you want to hear the story about how I got started,” he said to Wilson one day on the Beach Strip, as he rolled a cigarette, “cradling it between two big brown fingers that look like old bananas.”
Wilson wrote: On a hot night in July 1968, Pete came to visit Mike, lighthouse keeper at the time.
“Round about 11:30 Mike said he had to wake up old Jack. There was an assistant in those days.”
They went to the little cottage out back and banged on the door. Then the windows. Finally they broke down the front door and a black cat came tearing out.
Jack was inside. Dead.
“The God’s truth. I started work the next morning at 8 a.m.”

Jon Wells is a Hamilton-based reporter and feature writer for The Spectator. Reach him via email: jwells@thespec.com

Technology has old-time lightkeeper in shadows.
The Hamilton Spectator, June 1987