Sailors from two centuries ago to be remembered

The Hamilton Spectator
Tuesday Aug 2 2011
With the 200th anniversary of the War of 1812 fast approaching, a special commemoration of the loss of 53 American sailors on the Scourge and Hamilton is being arranged for Aug. 7.

The hour-long ceremony will take place at The Hamilton and Scourge Naval Memorial Garden at Confederation Park to acknowledge the sailors who died in what was the largest loss of life suffered by the United States Navy in that war.

The warships sunk to the bottom of Lake Ontario in the early morning hours of Aug. 8, 1813 when they were struck by a sudden squall that took down the ships in a matter of minutes or even seconds.

Michael McAllister, Coordinator of the Hamilton Military Museum, says there have been commemorations sporadically over the years, but with the 200th anniversary of the War of 1812 coming up next year, organizers have decided to host services each year until 2014.

This year’s ceremony will include a chaplain from the American Legion of Veterans.

McAllister says the memorial garden at Confederation Park was built to remember the American sailors and raise public awareness of the tragedy, even though the site is a considerable distance from where the sinkings actually took place. The closest community on the shore is Port Dalhousie.

“The whole idea is to have a place where we could pay respects to those people who served,” he said.

At one time, there were enthusiastic plans to raise the ships for public display after the City of Hamilton was granted ownership of them by an act of the American Congress. But decades after their discovery no firm plan is in place.

McAllister says raising the ships is “not off the table” as a possibility in the future. But much study still has to be done.

In 2013, he says, a service will be held out on Lake Ontario in boats above where the ships went down in what is now a designated National Historic Site and underwater archaeological site that is protected with security system.

The Scourge and Hamilton were merchant ships before being put into service with the American navy. In civilian life they would have had a crew of less than 10. But as warships nearly five times that.

Examination of the ships during various submersible dives to the site in 100 metres of water, have disclosed large concentrations of zebra mussels. A most recent dive a couple of years ago, that was shown on the History Channel, showed footage from inside one of the ships for the first time. From the footage, the filmmakers argued the converted cargo ships would have easily sunk because they were top heavy with guns with cavernous holds underneath that would have swiftly taken on water.

What: The hour-long ceremony will feature a service to commemorate the 53 American sailors who died on Aug. 8, 1813. The City of Hamilton and the Hamilton and Scourge Society will also host the inaugural raising of the flags of Canada, Great Britain and the United States on a newly installed nautical flagpole.

The Garden: It was built in 1983 and features 53 headstones which commemorate the loss of sailors from the two American schooners.

I stopped by the Hamilton and Scourge Naval Memorial Garden at Confederation Park today to take a few shots of the ceremony to remember the lost American navy personnel during the War of 1812. 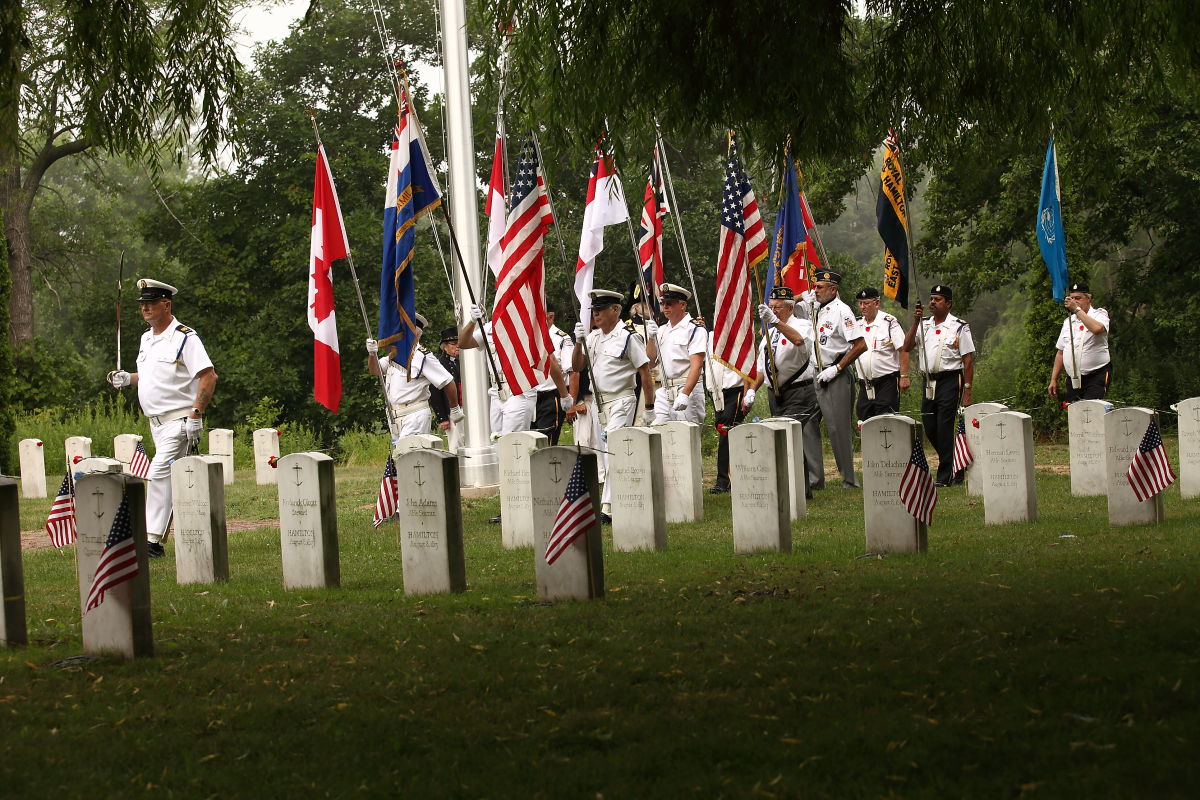 A coincidental salute to our naval heritage

The city’s Naval Memorial Garden in Confederation Park honours the 53 American sailors lost in the sinking of the two schooners and is a symbol of the shared respect between Canada and the United States. But this year the memorial service was held at Dundurn Castle to recognize the outstanding display of Hamilton and Scourge artifacts in the site’s military museum and to disclose the part played by Sir Allan Napier MacNab, the laird of Dundurn, in the Hamilton and Scourge story.