Checking an old photo of the area from 1950, many of the businesses are labeled and a golf course is not shown, however a Wilson's bowling alley is shown. Could be the same family.

Well if there was a Wilson's Bowling Alley I would bet money that there was also a Wilson's Golf Course. Not getting reply from my cousin.

Drogo said:
Well if there was a Wilson's Bowling Alley I would bet money that there was also a Wilson's Golf Course. Not getting reply from my cousin.
Click to expand...
I was looking for a date on the golf card and don't see one, for some reason I recall 1938 but I don't see that anywhere. Attached is an aerial shot from 1945 and a golf course should stand out, yet I don't see one.

Thanks to McMaster library.

I got the pic off your upload so I could zoom in. I assume this is from the War arial photo collection from Mac.

Drogo said:
I got the pic off your upload so I could zoom in. I assume this is from the War arial photo collection from Mac.
Click to expand...
Yes from on-line Mac Library, looking in the general area of Wilson's Bowling as labeled in the first photo, I still don't see where a golf course or even a mini-put would be. I will see if Mac Library has other years showing the same area.

I just checked with an ex-resident of Van Wagner's who use to set pins at Wilson's Bowling Alley as a kid and he doesn't recall a golf course of any kind, but did say that he would go to the driving range at the corner of Hwy 20 and Barton St. The mystery continues I guess.

I checked back through the McMaster Library aerial photos and I believe I see an area that could very well be a golf course. This set of photos were taken back in 1966 when there was still a lot of farm land in the area, The black arrow points towards to the place where the ex-resident use to drive golf balls (Hwy 20 and Barton St.) and there is a medium sized golf course and a mini-put to the west. But this isn't considered Van Wagner's. 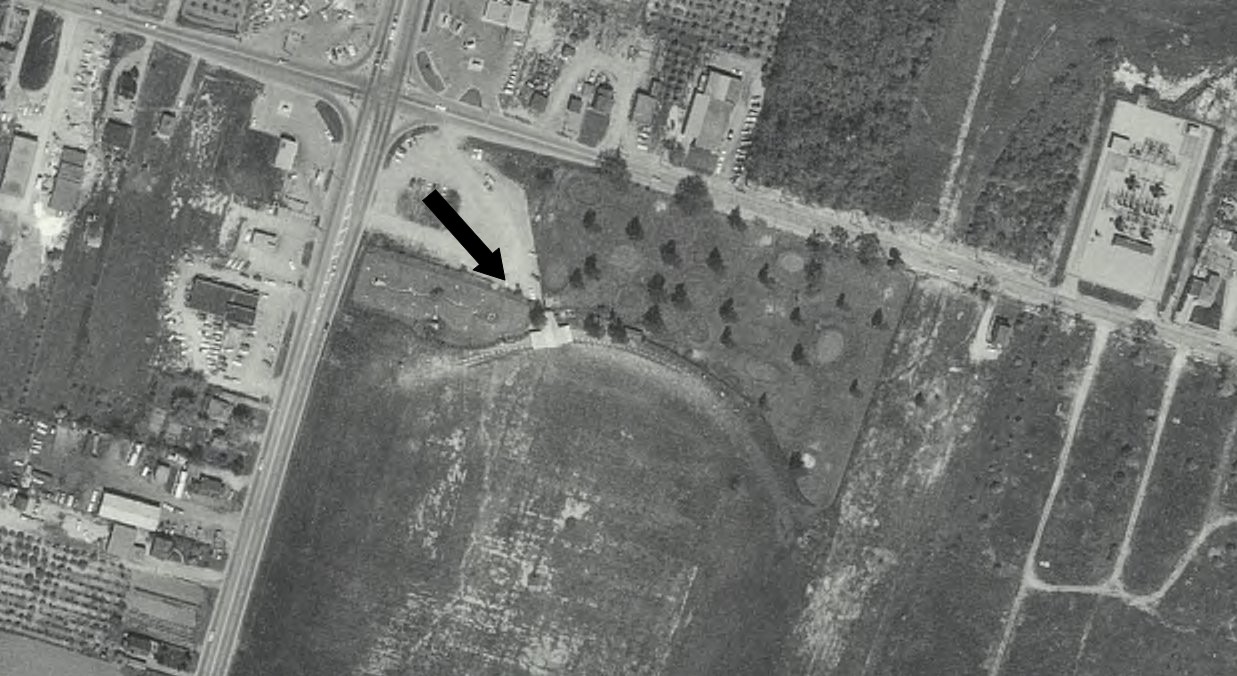 Is the Van Wagner's Golf Club, the Stoney Creek Golf and Country Club?

Jim Coleman
The Globe and Mail
March 21, 1949
There is some consideration-and understandable, it is among the members of the Stoney Creek Golf and Country Club. To elucidate the course of the Stoney Creek Golf and Country Club has disappeared. It has been the custom of the members led by their estimable president, Irish Davy Ambeasley, the unofficial mayor of Van Wagner’s Beach, to open the course with a team match on the Sunday succeeding St. Patrick’s Day.
Mr. Ambersley’s residence at Stoney Creek serves as the organizations clubhouse.
Yesterday morning, after fortifying themselves for the ordeal, President Ambersley and his fellow members donned their plus-fours, picked up their clubs and strode purposefully toward the first tee.
When they reached the customary sight of the first tee, they discovered that they were in a bare, open field. Irish Davy looked around and broke into profuse perspiration. Obviously, he reasoned, the prolonged celebrations attendant to St. Patrick’s Day had been more debilitating than he had expected.
“My eyes aren’t as good as they use to be” he said, wiping his hand over his face. “Will someone point out the direction of the first green.”
“There ain’t no green.” Yelped one of his startled followers. “There ain’t no tees. Some such and such stole the blankety-blank course during the night.
Mr. Ambersley’s companions were only partially correct. The links of the Stoney Creek Golf and Country Club- which is an 18-hole “miniature golf” course-has been borrowed and re-erected on the second floor of the Coliseum Annex at the Canadian National Exhibition Grounds. There, it is one of the attractions at the Canadian Sportsman Show.
Furthermore, your agent played the course on Saturday night. Hearing reports that Sunday’s experiences had worried Mr. Ambersley’s to such an extent that he was considering giving up The Sauce, we hastened to telephone him to set his mind at rest. “Capital! Capital!” cried Mr. Ambersley’s over the telephone, when we told him that we had located the links in the Exhibition buildings. “How did you score on the first?”
“I had a Two,” we told him. “My drive was pin-high and I sank my approach shot.”
“Capital! Capital!” murmured Mr. Ambersley. “How did you score on the second?”
“I had another Two,” we answered. “I sliced my drive but it hit a spectator and rebounded within six inches of the cup. I sank it with the handle of the rake”
Mr. Ambersley plainly was elated as we related the details of our round omitting only the reference to the unfortunate incident of the bending lady on the 10th, whom we struck with our drive. “They must be keeping our course in great shape, eh?” chuckled Mr. Ambersley, over the phone.
“Well, er, the 17th ….” we started lamely.
“What ABOUT the 17th?” roared Mr. Ambersley. “Sportiest hole on the course. You should have a Three there if you played the carom off the back cushion.”
“It’s this way, see,” we said, trying to break the news to him as gently as possible. “The Dog Show is being held in the same building”
“So what,” interjected Mr. Ambersley testily?
“Well,” we whispered, “there’s snow on the ground outside so the dog owners have to have some place to exercise their dogs. Well, you know that papier-mâché tree on the 17th fairway…”
There was an ominous silence at the other end of the long distance phone line. When Mr. Ambersley resumed the conversation he sounded old and tired.
“This is going to be a costly business and, rightly, it should be referred to the Green’s Committee,” he said. “However, for the moment, have a notice posted on the first tee. Have these words printed on the notice; “On fairways where there is Casual Water, members will be permitted to play Winter Rules.”
“Right, sir,” we replied smartly, “and very magnanimous of you.”
“Not at all,” answered Mr. Ambersley, his rough voice belying his heart of gold. “After all, a dog is a man’s best friend.”
D

Well there you go. I figured it had to had been real. Even if that isn't the location the paper verifies it existed.

Drogo said:
Well there you go. I figured it had to had been real. Even if that isn't the location the paper verifies it existed.
Click to expand...
Also, if you search Van Wagner's Beach, unlike Hamilton or Burlington Beach, there is only one.
I checked the Van Wagner's book for the name Ambeasley and for being considered the unofficial mayor, you would think that the name would appear many times. The only reference to the name is under the nickname Irish Davy as he is also referred to in the opinion article.
Muriel Gray Barlow writes;
"I remember being aware of a person called Irish Davy who lived in a small rented cottage on the lower end of the beach and where it was quietly known by interested persons as a place to go for their "requirements" during the prohibition years. He later moved to a house on Lake Ave across from the canning factory and the community was shocked one day to hear of a murder that had been committed there the day before."

I checked today with person from eBay who I bought the card from, looks like the Stoney Creek Club is not the same place.

"I had to ask my 80 year old father just to confirm where it was. It was only there for less than 10 years. It was to the east of the amusement park.
Sorry but that's all i can give you."

The amusement park would of been close to the bowling alley.

Checking more info from other sources and the Memories of Van Wagner's book, and small gold course can be seen in this McMaster Library aerial photo from 1950, very close to what is now Baranga's. Notice the amount of homes in the area compared to today, there are none. 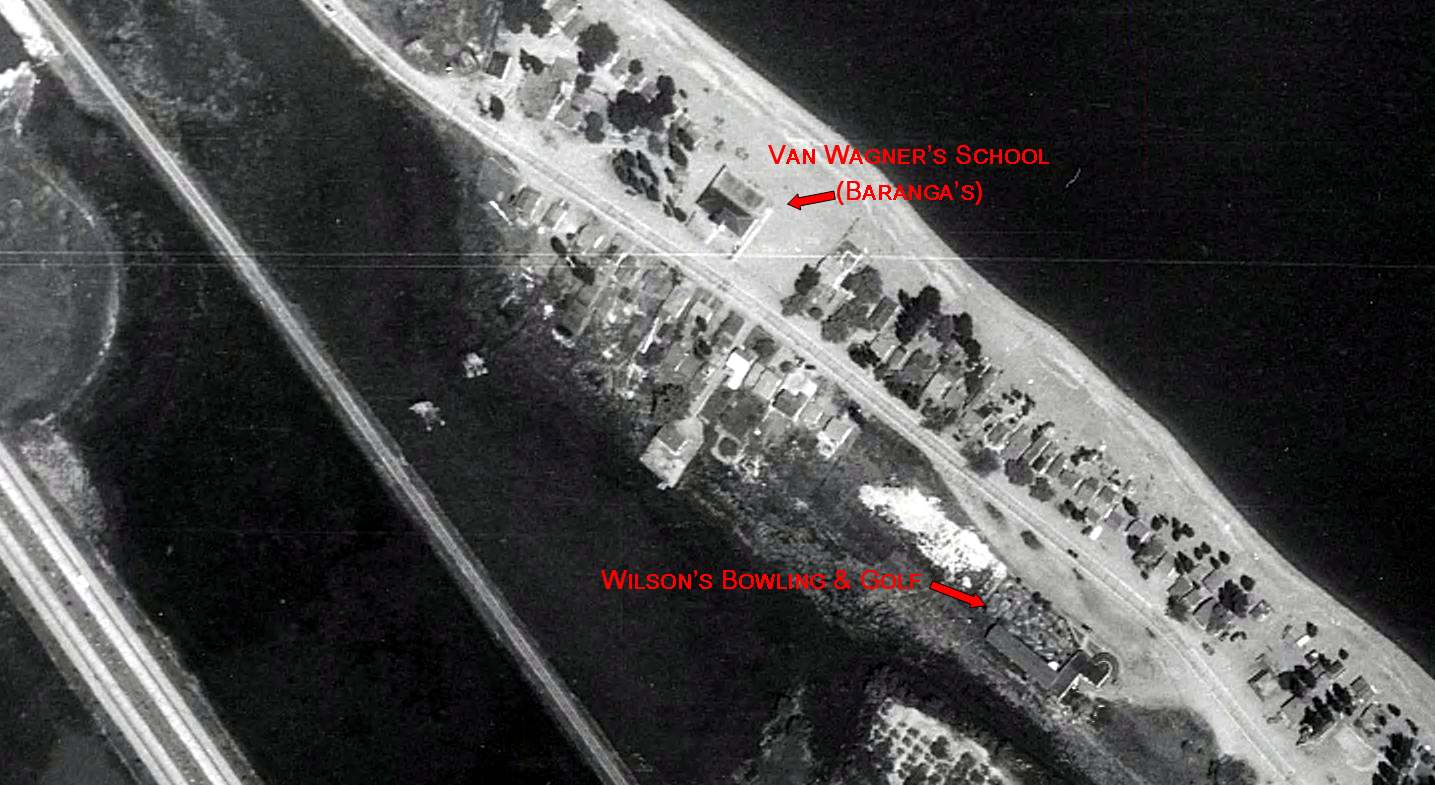 Another angle from a cropped TPL picture circa 1958, the red arrow points to Wilson's Golf and the blue is now Baranga's. There is now a large berm located where Wilson Bowling and Gold used to be located. The intersection just south of the red arrow is Nash Rd and Van Wagner's. 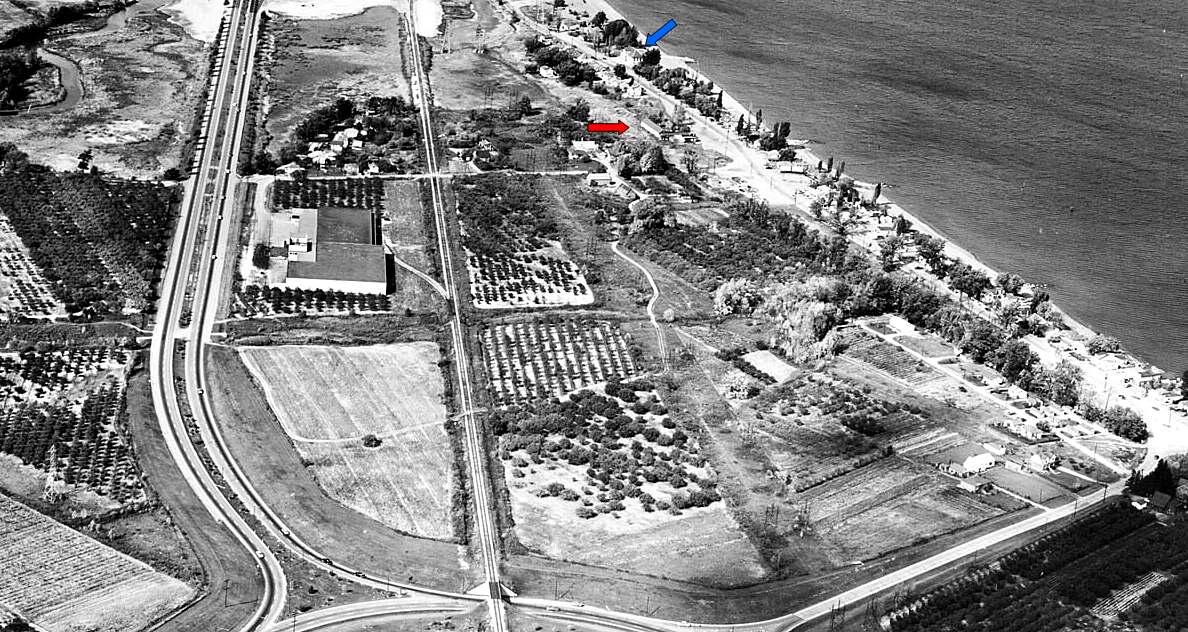 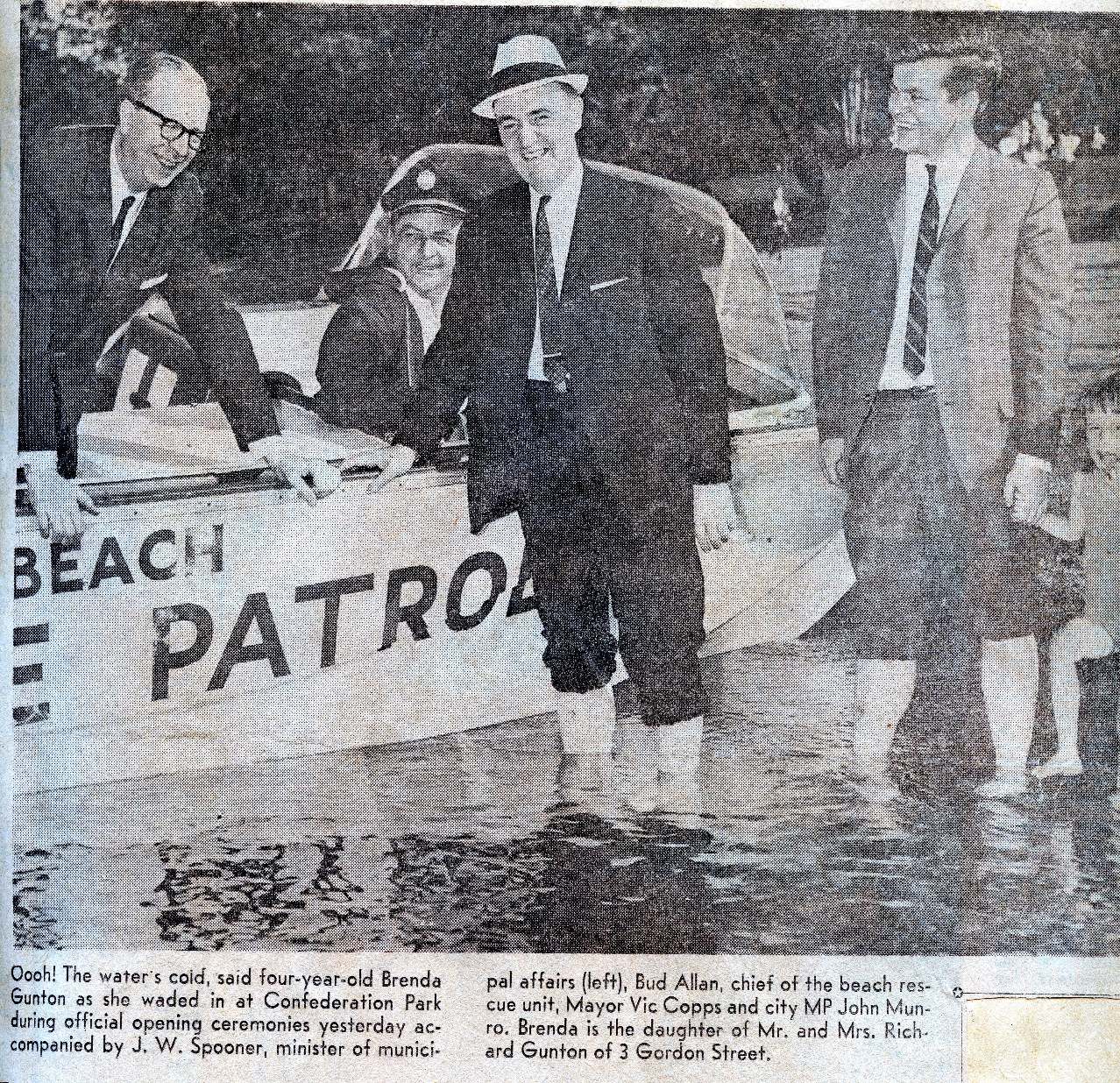 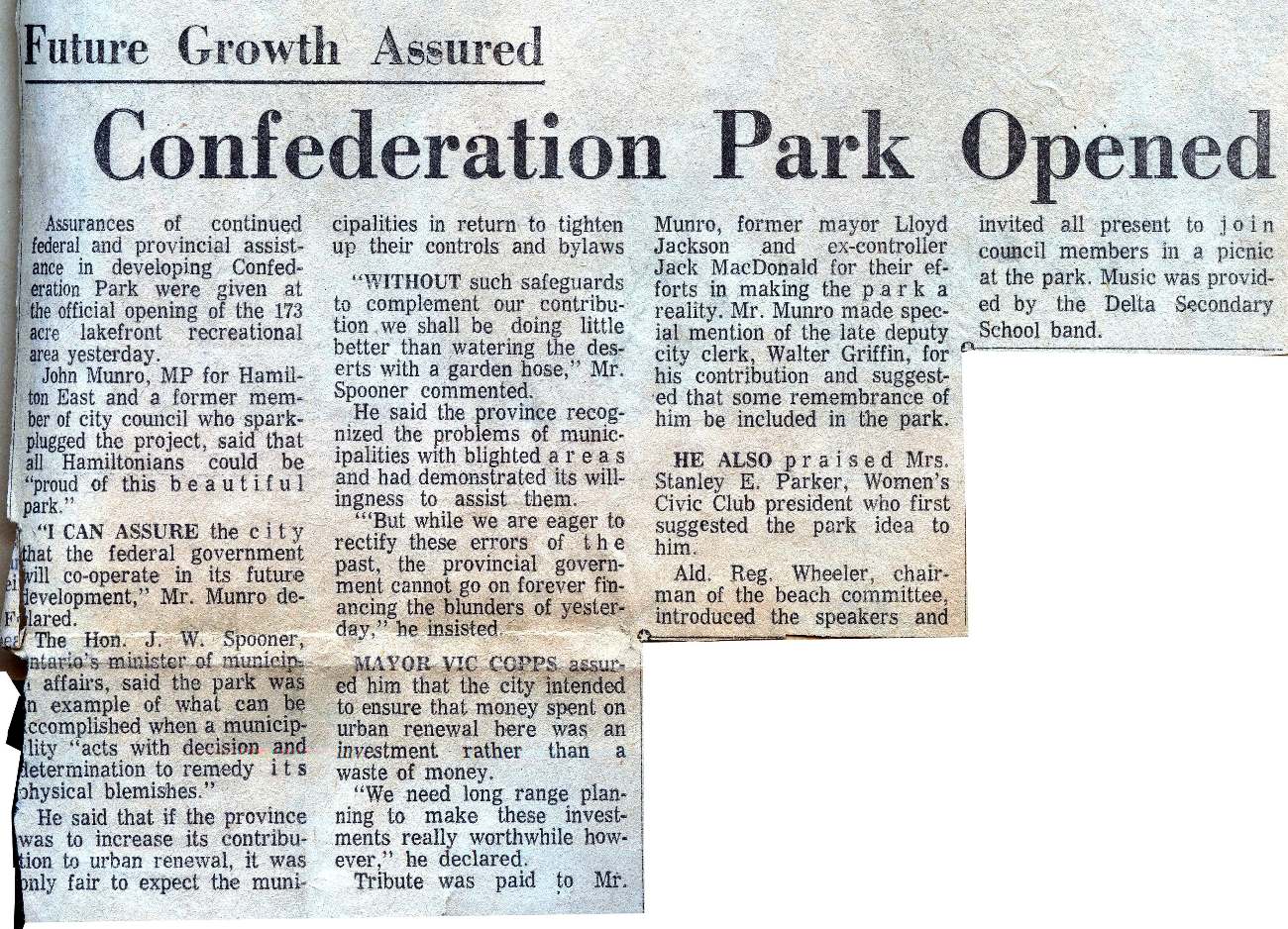