Will the Beach Strip project get completed before the curtain falls?

Paul Wilson: Will the Beach Strip project get completed before the curtain falls?
Fred Briggs danced and filmed his way through 70 years of life and family and the Beach Strip
Opinion November 18, 2019 by Paul Wilson Hamilton Spectator 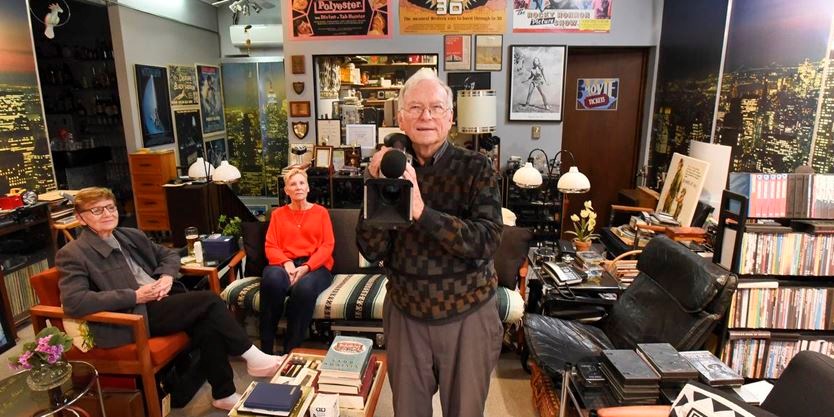 Fred Briggs, with his wife Carolyn with his daughter Adrienne, in the attic room that houses memories of his film making and a lot of the detris of years of his work, including a wall made into a projection screen and a projection booth. - John Rennison,The Hamilton Spectator 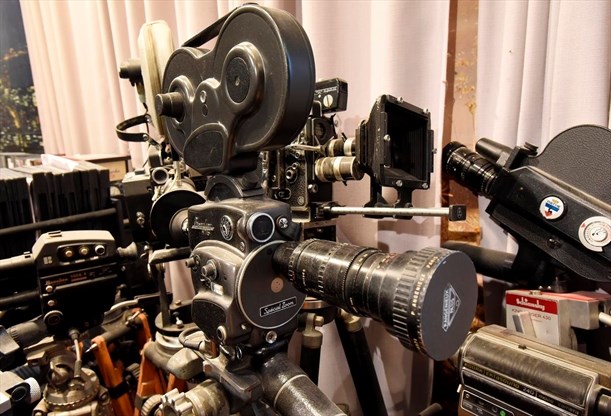 Some of Fred Briggs’s film movie cameras in his collection. - John Rennison , The Hamilton Spectator 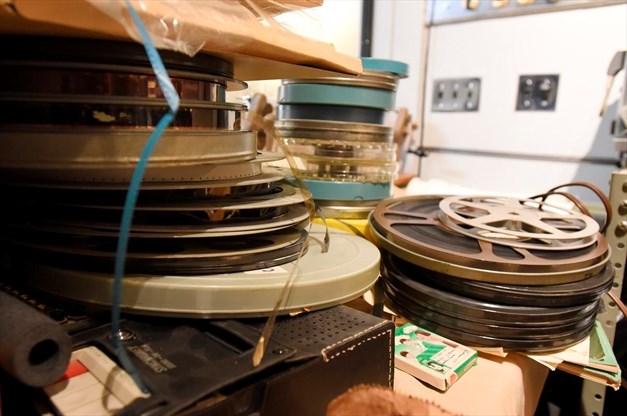 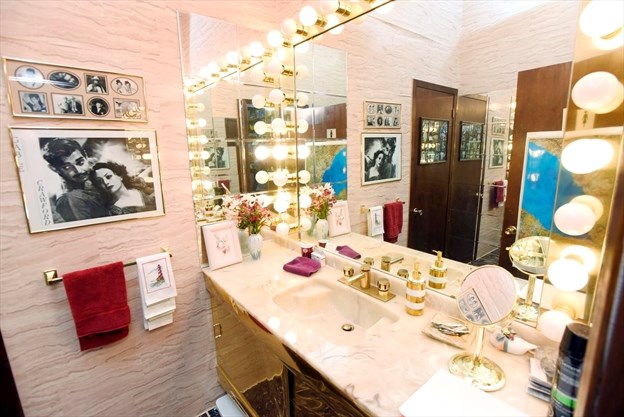 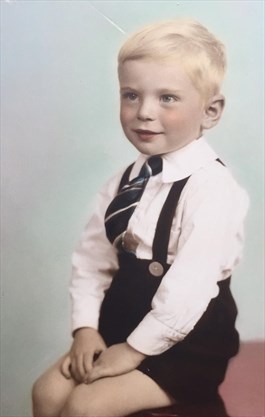 Fred Briggs grew up in a cottage on the Beach Strip. Later he loved the movies, but back then dancing came first. - Family photo 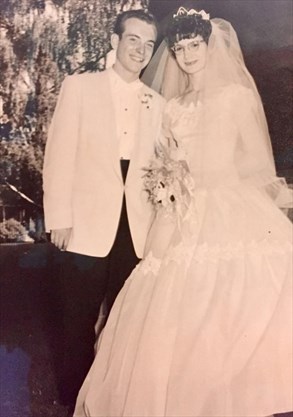 Fred Briggs met Carolyn Stewart, and she declares it has been an exciting ride ever since. - Family photo

Growing up on the Beach Strip in the 1940s, young Fred Briggs would dance to whatever music was playing in the small frame cottage where he lived. No partner, but in the reflection of a pair of glass cabinet doors, he loved to watch himself moving about.
We should be putting that boy in classes, mother decided. So off he went each week to the Nancy Campbell studio downtown. He became quite the little tap dancer.
Probably not many other boys in that class. "There was one," Fred says. He searches the recesses of his mind and comes up with a name — Bernard Davern. Pretty good for an acquaintanceship from more than 70 years ago.


But ask Fred what he did yesterday, and it gets tougher. He's upfront about this, had to be after they took away his licence last year. Spotless driving record, but he just couldn't draw that damn clock for the Alzheimer's test.
Fred's lucky. He has a wife and a daughter who love him. But they do wish that, before it's too late, they could coax him to do something about the room at the top of the stairs. 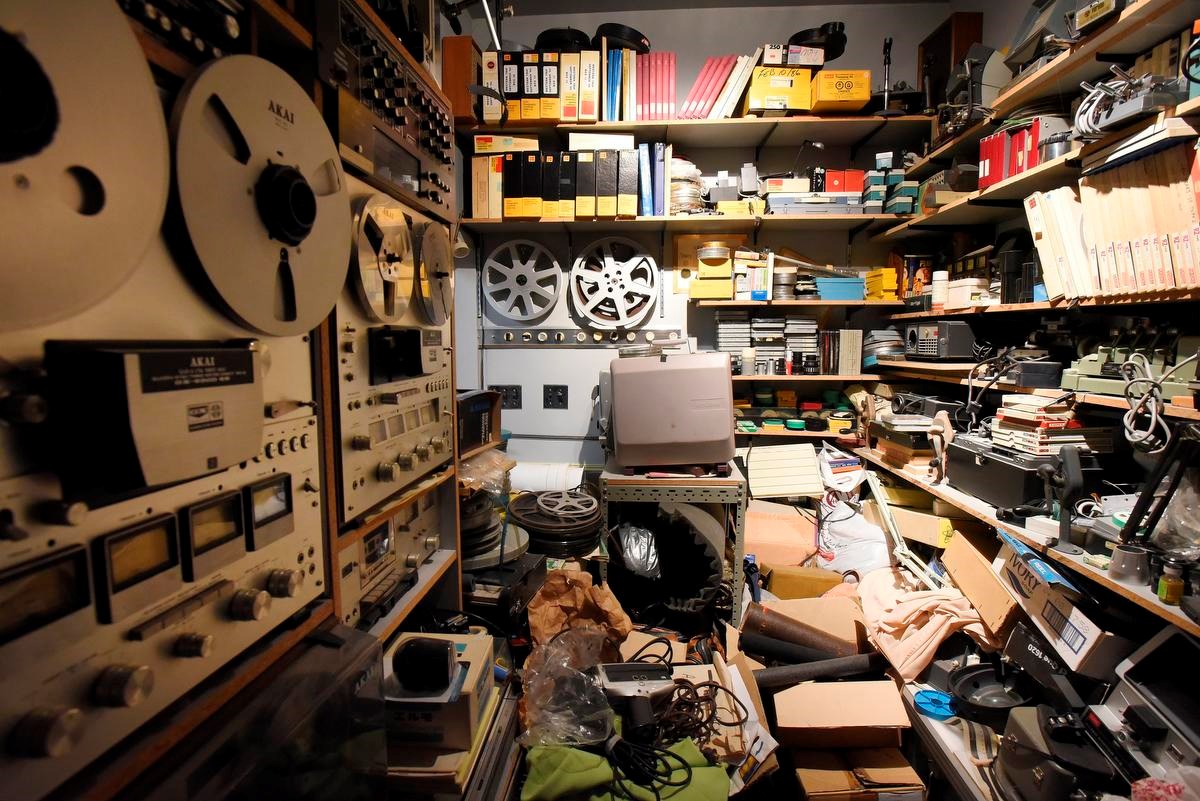 Fred lived the first 17 years of life on the Strip. He had a little Kodak Brownie. Even then, he wanted to make the memories of life on that sand spit last.
Then they moved into Stoney Creek. At Saltfleet High, he met Carolyn Stewart. They married, and while Fred embarked on a long career at Dofasco, they raised daughter Adrienne. She was the star of many home movies. "Stop unwrapping," Fred would tell her around the Christmas tree. He was working on a better shot.
Fred was able to retire at just 53, nearly 30 years ago.

Adrienne explains that around then her father decided to ramp things up. His own father had been diagnosed with Alzheimer's too early in life. Maybe Fred, by keeping really active with the movie hobby, could stave off the disease. 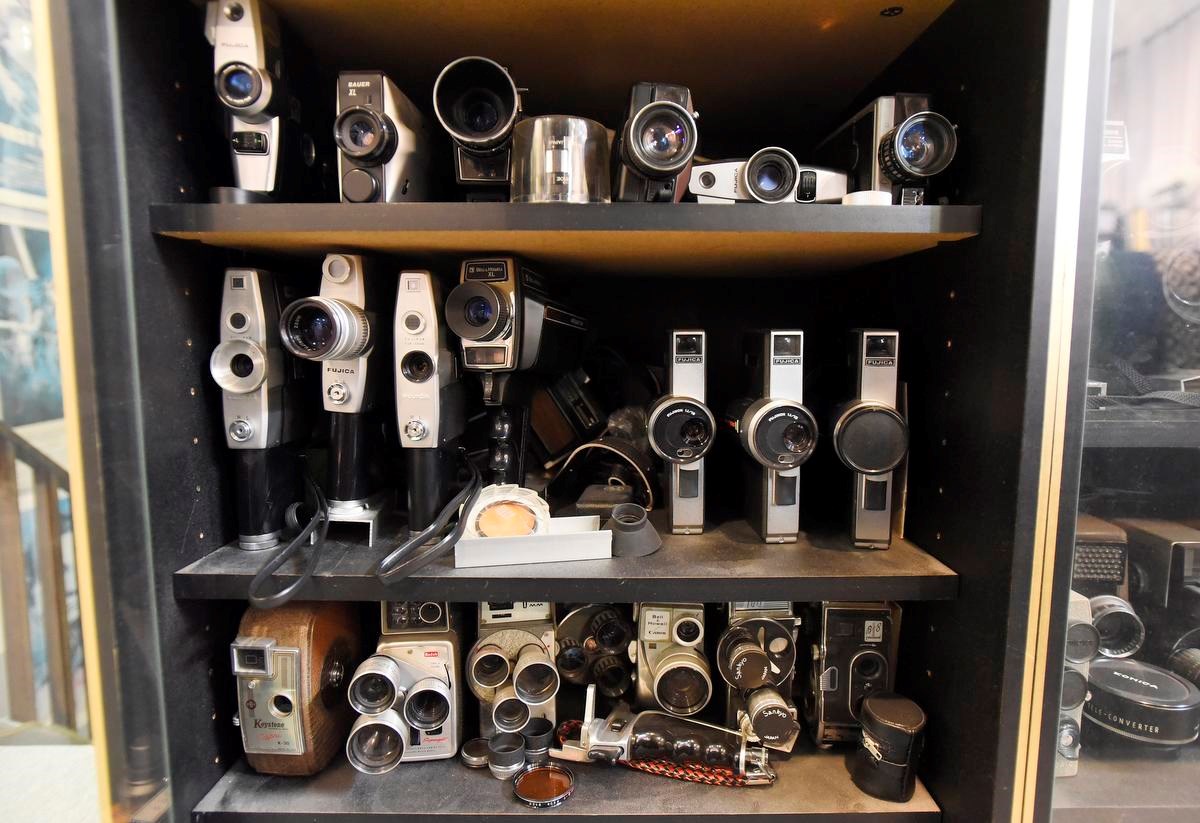 So not long before retirement, Fred and Carolyn's compact frame house grew a whole big second floor. Not for a spare bedroom. This was Fred's studio. Video would be made and edited here. Movies would be viewed as they should be — 10 feet tall.

Fred issues a disclaimer. "I'm not proud of this place. It was a good idea, but it ran away from me." 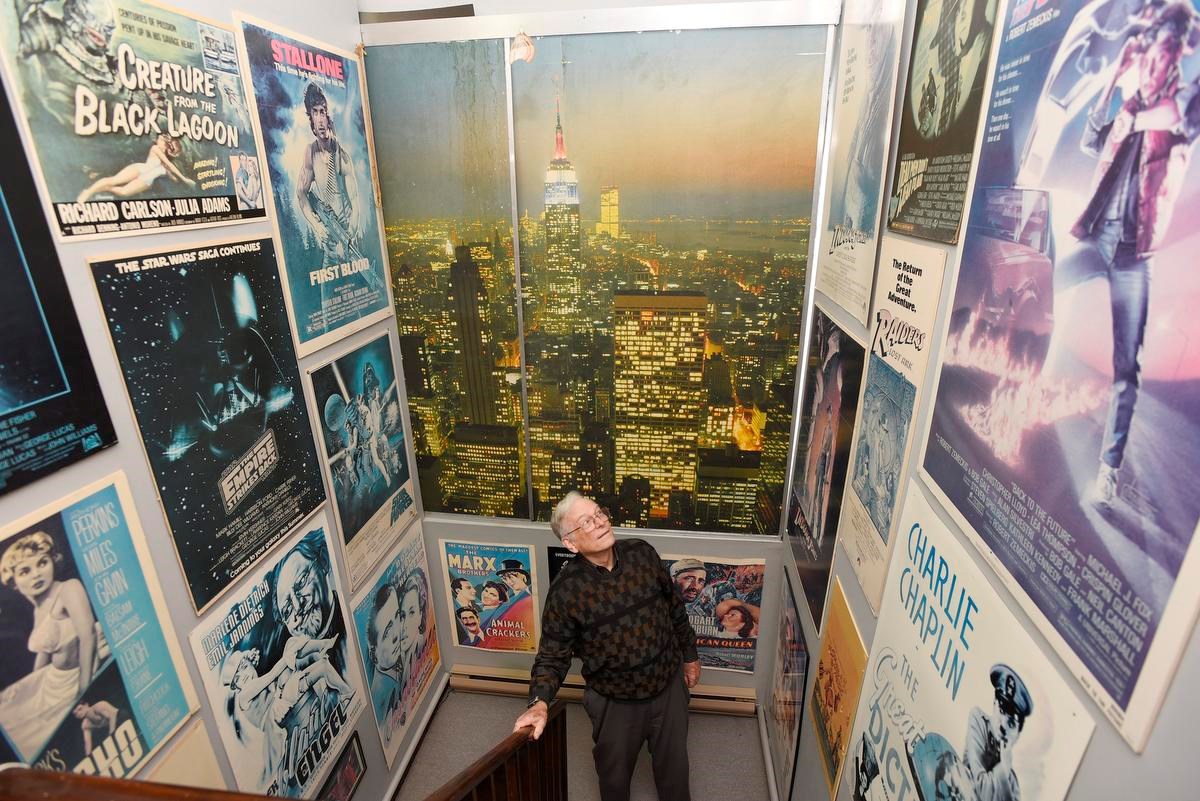 Up we go, past the movie posters, from Psycho to Raquel Welch's One Million Years BC. And now we are in a soft-lit land of old reel-to-reel tape machines, sound-effect albums, tins of Super 8, old still cameras by the dozens, big movie cameras on wooden tripods.

There is a glassed-in projection room. A gold-trimmed Hollywood bathroom. And a proper bar up here, too. Sometimes the executive of the old camera club would meet here. Fred was president for the longest time, and Carolyn served right alongside him as secretary.

Fred shot everywhere, but the project closest to his heart was the Beach Strip. He wanted to tell its story — maybe a film and companion book. But there were always a few more people to talk to. And the piece never got finished.

Now it's hard to know what's where, in all those shelves and drawers and boxes. Adrienne would dearly love to see someone who knows what they're doing come in and bring order to this — and maybe even get her father's project finished.

Carolyn sees it a little differently. Life with Fred, she says, has always been an exciting ride, and she was glad to go along.

"He enjoyed his project so much, and meeting the people, too," she says. "If it doesn't get done, that's OK."

This summer they marked their 60th anniversary. May the adventure continue. 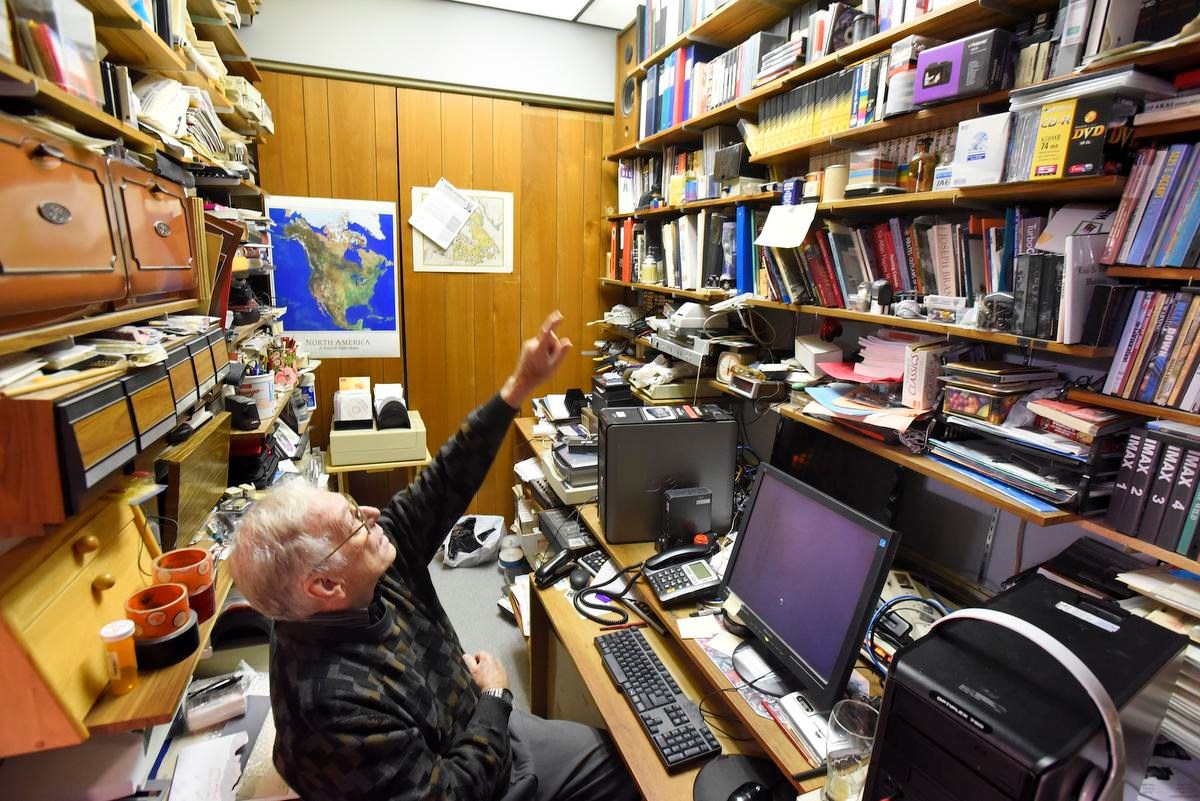 Fred Briggs' points to research on a top self in his work room for his favourite project on the beach strip, information people now contact him for. | John Rennison, The Hamilton Spectator