Just in case any residents seen some action on the beach yesterday, posted with full permission from the Hamilton Spectator.

High school students get a hands-on idea of what Canadian soldiers went through at Dieppe
By Rob Faulkner
The Hamilton Spectator(Oct 19, 2005)
Brandi Cheverie likes basketball and plans to run the 100-metre this spring. But she had some trouble storming the beaches of Dieppe at school yesterday.

"Come on, Brandi, you can do it," says 2nd Lieutenant Jordan Spoelstra, recruiting officer with the Royal Hamilton Light Infantry.

He runs beside her as her helmet falls over her eyes.

He stops her fall as she trips, exhausted by running in knee-deep water in hip waders.

He carries her 18-kilogram pack on her return run, er, walk to finish a simulated beach raid, a mini-Dieppe that the Rileys have laid out.

"This is so heavy. It's like carrying my niece," Brandi says of her webbing vest. Panting and dragging her feet, she didn't even attempt to lift the pack Spoelstra stuffed with weights.

Welcome to the new style of education, Hamilton style.

Out on the Beach Strip, in the shadow of the Skyway, three classes of Grade 9 applied Canadian geography students at Sir Winston Churchill secondary school are putting the past into practice. A few Grade 11s are also here.

They arrive before 9 a.m., a gaggle of hooded sweatshirts, clingy jeans and black toques pulled low. It's their first school trip of the year and a field test for a new way to teach the course, using local knowledge and hands-on activities.

The idea is to use local features, such as the beach, as a way to learn how water behaves.

The 70 students visit three stations. First the beach raid simulation with its run through water and sand to feel Dieppe. Next is a sand station with master sand sculptor Sandi Stirling to learn about water dynamics. Last, a stop at the Dieppe monument to hear what it was like to be a young Hamilton lad in 1942.

At the monument is veteran Jack McFarland, 84, with stories that could hook any kid raised on the movie Saving Private Ryan.

His voice is weak but his words about the ill-fated raid that killed 197 Rileys in France are tough.

The kids crowd around as McFarland speaks, competing with the roar of the Skyway. He tells them how Dieppe was a resort town; how the Allies expected sand but found a rock-strewn beach; how German mortar fire spit the rocks in a deadly rain as troops waded ashore.

But how did the 1942 raid actually feel? The answer will stick with these students longer than a textbook lesson ever will.

"The real focus in applied courses is on doing," says geography teacher Gary Watson. He and his colleagues Ryan Hall and Alex Komarniski started to plan more hands-on learning back in June.

"We're trying to make it applied, not just an easier academic course."

Brandi says she learns more outside the classroom and prefers it when she's doing things.

But she admits that the watery run was hard.

Churchill is an east-end school in a working class area. About 60 per cent of its 1,000 students are in applied level courses. It's a much more hands-on crowd than Westdale, for example.

But too often, Watson says, kids in applied-level courses aren't the first to be taken on field trips. They're thought to be hard to handle in public; they might do or say the wrong thing, the thinking goes.

"But we need to think of trips for them. Not just, 'Well, if there are spots on the bus, we'll take some applied kids.' To be honest, that's usually how it works."

He admits the Dieppe angle may be a stretch for a geography course. But a morning near the memorial would have been odd if the link to history wasn't used. Plus, the kids take Canadian history in Grade 10. And the Rileys offer one possible career path.

Indeed, Spoelstra, a McMaster graduate from Ancaster, was glad to chat to students about joining the military.

His superiors want him to spread the word.

If you have a story about innovative education in our area, please contact rfaulkner@thespec.com 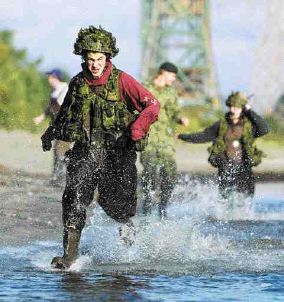 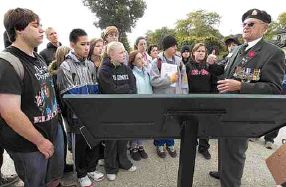