The above noted project is tentatively proposed as part of the 2020 Capital Budget Roads Program. City staff are working on a design for the resurfacing of Beach Blvd (full length). The Cycling Master Plan recommends bicycle lanes on this street. The plan to create bicycle lanes is to advance what is possible when the street is resurfaced, thus City staff are currently investigating opportunities. You may recall we discussed options at a meeting a few months ago; and staff’s goal is to encourage the faster cyclists to use Beach Blvd, and only permit slower/ relaxed cyclists to use the adjacent Beach Strip Breezeway multi-use trail.

Bicycle lanes on Beach Blvd would not remove existing auto capacity, and we plan to preserve on-street parking on Beach Blvd. Existing on-street parking is on the lake-side of the street (the other side of the street is currently posted “no parking anytime”). We therefore propose to only add a bicycle lane in one direction (southbound, towards Niagara) at this time because of roadway width constraints, and the space for this bicycle lane can be created by narrowing the “unused” asphalt between the two yellow centrelines (note the red ‘X’ in the image below). The following image helps to describe the concept:

With the extra encouragement for on-street cycling in the southbound direction; we envision that faster, more skilled cyclists will opt to use this street in both directions, even without a bicycle lane in the northbound direction. We have observed on-street parking usage along the street, and there are significant segments of low-usage of on-street parking along the lake-side of the street, where parking is permitted (thus space for cyclists). Once we have a preliminary design, we would ask to review it with you, including considerations for the parking issue you had flagged previously at the north end of the street by Jimmy Lomax Park.

We require your approval for this consideration of possible cycling infrastructure. A response via email is sufficient; but if you wish, we are available to discuss. The design stage of the project will make a final determination if the cycling component can be achieved. To meet deadlines for Capital Budget processing, we require your response in the next week or two.

Update from the City

The City of Hamilton would like to inform you that your street has been
identified for road resurfacing in the upcoming months. One of the
reasons for letting you know of this upcoming work is to provide you
with an opportunity to coordinate any work that would require a road
cut prior to the planned repaving. Voluntary works initiated by
residents, such as repairs or upgrades to your property's water or
sewer lines require a road cut. Road cuts ruin the look of new
pavement, reduce the lifespan of new roads, and cause a bumpy ride
for drivers, transit riders, cyclists, etc.

We recognize that keeping our streets in good condition is a priority
for our residents and limiting the amount of avoidable road cuts to
newly paved roads is a way to do so.

Why would you want to repair or upgrade your water or sewer line?

I was informed today that the road upgrade will begin this coming Monday, some of the medium at the south end of the boulevard will be removed and some of the bus inlays will also be removed and the curbs straighten. The work may last until October. 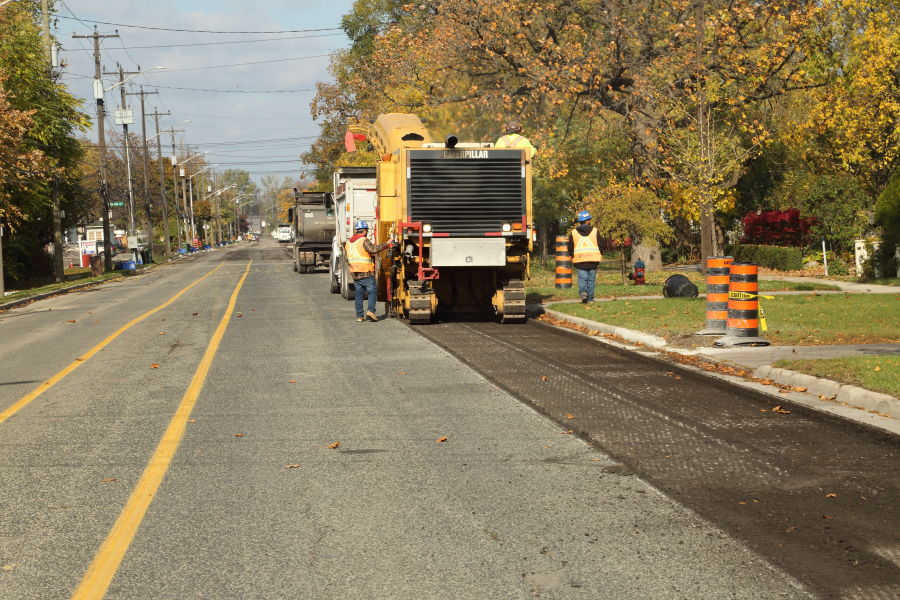 The new road is almost complete, just a few lines have to be added.
This is a letter to the Editor at the Spec from the principal of Bell Cairn School who is concerned after the road was resurfaced, dated around September 1952.

The newly resurfaced provincial highway through the Beach Strip has now become a speedway for many motorists, truck drivers, etc. However, the Beach police are to be commended for their determined efforts in trying to keep the speed limit at 30 miles' per hour, in this 30-m.p.h. zone. Too, their vigilance for the safety of pedestrians, particularly children, attempting to cross the highway, has not gone unnoticed. '

The numerous highway signs on both sides of the road, showing the speed limit of 30 miles, were not placed as ornaments to beautify the Beach. They were placed for one purpose, and that was to avert automobile accidents with the possible loss of life, in this thickly populated residential area. Serious automobile accidents on the Beach Strip in recent years have not been too uncommon.

Hundreds of motorists, truck drivers, etc., are presently driving through the Beach late at night, and in the early hours of the morning, at speeds close to 50 m.p.h. The newly resurfaced highway and new temporary bridge have decidedly speeded, up motor traffic through the Beach, until it has now reached the dangerous stage. Has it relieved the chronic bottleneck? When are automatic traffic signals going to be installed at the intersection of the Windermere Cut-off, Queen Elizabeth Highway and the Beach Boulevard, These are $64 questions, Who can answer them?
William Johnston.

Resurface Highway Along Beach Strip
Hamilton Beach, July 22, 1952 — After many years of continual patching and pot holes, the main thoroughfare connecting the Queen Elizabeth Highway — the Hamilton Beach sandstrip — is having a complete resurfacing. Doing the extensive job is Towland Construction Company, under the direction of the Hamilton office of the Department of Highways,
A 22-foot width strip of asphalt hot-top will be laid from the Windermere cut-off to the Canal and on the north side of the Canal, to the Burlington limits. The original width was 20 feet.
The new road bed appears wider due to a straightening-up process. In many parts of the boulevard, the road practically touches the trees as at Station 12, on the west side, (the Bay side) making it a hazard for pedestrians and motorists. Under the new construction there will be a shoulder of from eight to 10 feet with crushed stone laid on this west side. The traffic is not delayed as the job progresses at a rapid pace. Due to the Canal bridge being closed to through-traffic, this is an ideal time for the work being done. In fact, both lanes are keeping pace together.
Assume Cost
The average Beach taxpayer is curious to know who will pay for this undertaking. On approaching Floyd C, Day, the new member of the Beach Commission, he stated that the provincial government was bearing the whole cost. In fact, the dirt strip, as the residents call the easterly side of the highway where the old
radial cars used to run, will all be put in good shape, after the churning the machinery is giving it, with a bed of crushed stone.
Vacation School
An average of 75 youngsters are daily attending the Vacation Bible School at the Beach Gospel Chapel. Despite the heat, the attendance has increased each day. This is the second ,week, with the Rev. H. Crocker in charge of the seniors and intermediates and Mrs. John Skene directing the beginners. With many willing teachers the children are learning Bible stories, constructing work books and handicrafts On Friday evening, at 7.30 p.m., parents land friends are cordially invited to attend the closing exercises and review the work which has been done. The classes are from 9.30 to 11.30 a.m. each week day.
Complete arrangements have been made for the children's sports day on Civic holiday, August 4, to start with the parade from the Canal at 9.30 a.m. to Dyne's Park. The Burlington Girl's and Boy's Band and the Hamilton Ladies Imperial Band will take a leading part. Not many youngsters attended the audition for Beach amateur talent to be given on the evening entertainment of the program and Miss J. Turner will be arranging for further auditions this week. Gordon Munger, scout master of the Twenty-fifth Troop, is making arrangements for all Scouts, Cubs, Girl Guides and Brownies to join the parade. All chairmen of the various committees are requested to meet tomorrow night, Wednesday, at 8 p.m. at the Beach Yacht Club.
You must log in or register to reply here.
Share: Facebook Twitter Google+ Reddit Pinterest Tumblr WhatsApp Email Link
Top Bottom