June 22, 2017 by Kevin Werner
Hamilton Spectator|
Hamilton Renewable Power Inc.'s plans to paint the city's distinctive blue and yellow globe at the Woodward Avenue Treatment Plan could cost the corporation hundreds of thousands of dollars in lost revenue this year.

David Oak, business administrator at the city, told the Hamilton Renewable Power Inc. board of directors June 15 that a worst-case scenario is the repainting of the eight-storey sphere will see an "unfavourable variance in revenues" this year of about $578,000.

The landmark sphere is scheduled to be repainted starting in August, forcing the shutdown of the Hamilton Renewable Power Inc.'s co-generation methane plant at the Woodward Avenue Treatment facility for an estimated 22 weeks, or until the end of the year, say officials.

The corporation's 2017 revenue projection is $3.3 million, but is forecasting instead due to the shutdown of $2.7 million in net revenue resulting in a deficit of $578,468.

Oak presented a second scenario where the cogeneration facility could operate 50 per cent, earning a net profit of $45,000. But he acknowledged it is a "low confidence forecast."

"There are a lot of unknowns," said Oak.

Tom Chessman, senior vice-president for Hamilton Renewable Energy Inc. said officials will be investigating whether if it's possible to bypass the sphere and continue operating the cogeneration facility.

He said if bypassing the sphere costs too much, then the cogeneration facility will remain dormant until after the work is done on the sphere.

"We are just trying to figure it out," he said. "If we have to spend too much, obviously it doesn't make any sense. We are trying to get an understanding of how much it will cost."

The sphere, built in 1970 for Horton Steel Works Ltd., is a pressure vessel for the storage of methane gas, a bi-product of anaerobic sludge digestion. It has a volume of 7,600 cubic metres.

The 1.6 MW cogeneration plant, started in 2006, converts methane into electricity and usable heat. The electricity is sold to the Ontario Power Authority under a 20-year agreement, and the heat is used for facility space heating and as part of the wastewater treatment process.

An inspection of the sphere found it to be structurally sound, but it needed to be repainted because it has "deteriorated," say officials. Once it is repainted, officials say it could last up to 30 years.

Chessman said the methane in the sphere will be drained and replaced with an inert gas to "stabilize" it.

"We don't want anything but inert gas in it," he said. "We will then start mobilizing, preparing the surface, put the infrastructure up to coat it. We have got to get it done before the snow flies."

Chessman said the colour scheme of blue and yellow, with the large 'Hamilton' letters, and the geographic design of the world will be the same.

The inspection of the sphere was prompted by upgrades being done on the Woodward Avenue Treatment Plant over the next seven years. 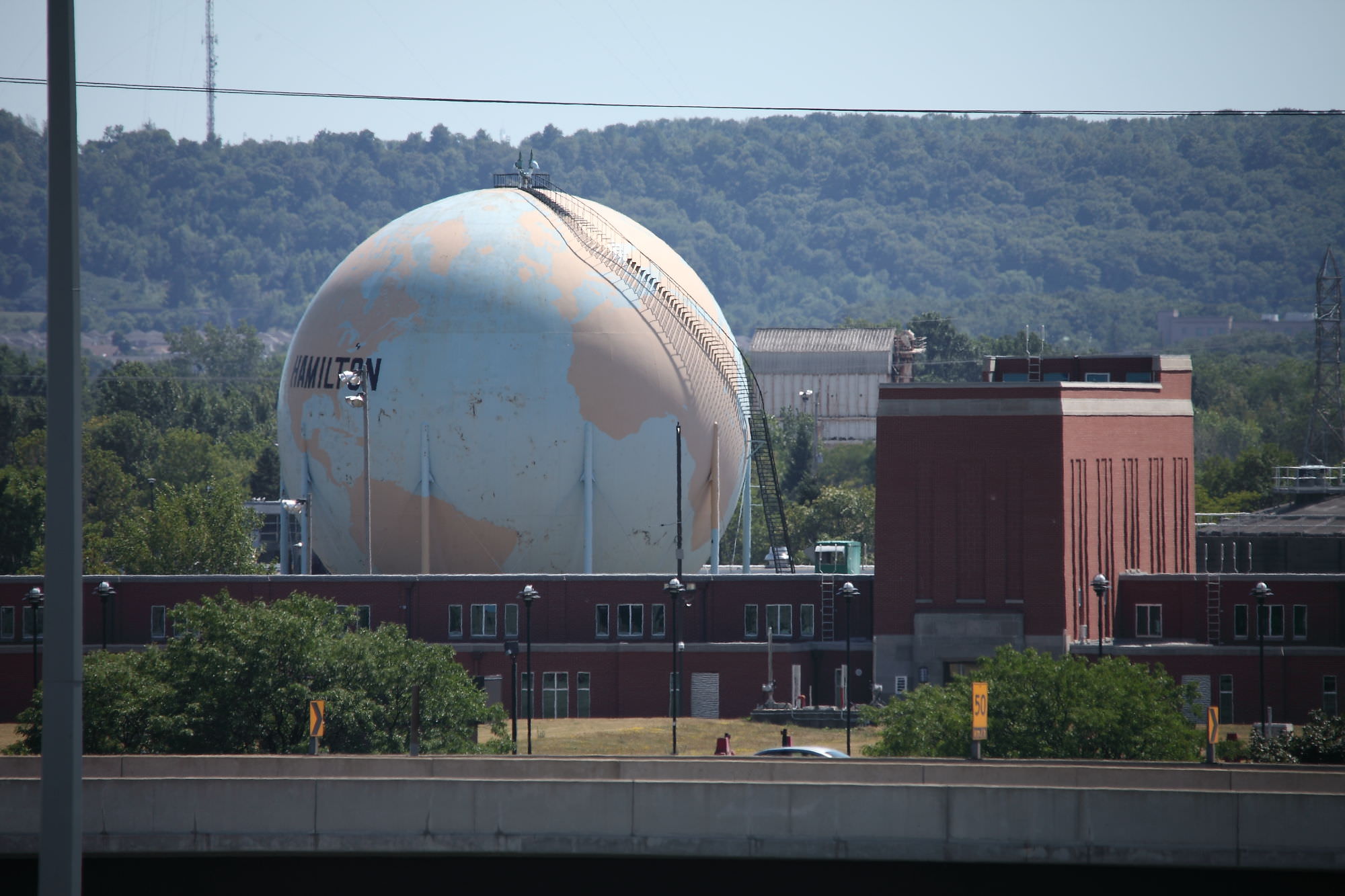 The Globe is now fully covered in and ready for repair, this photo was taken last week. 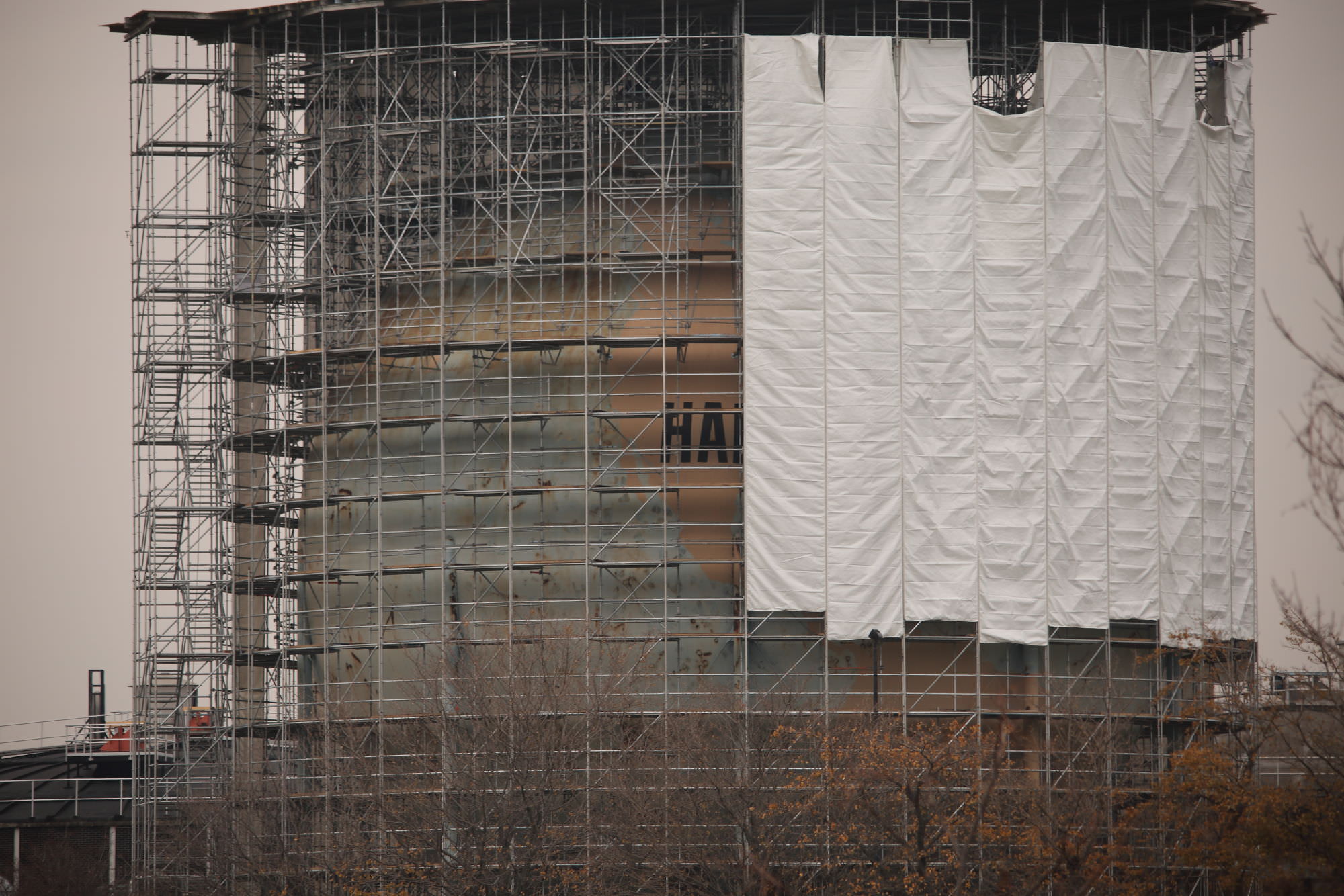 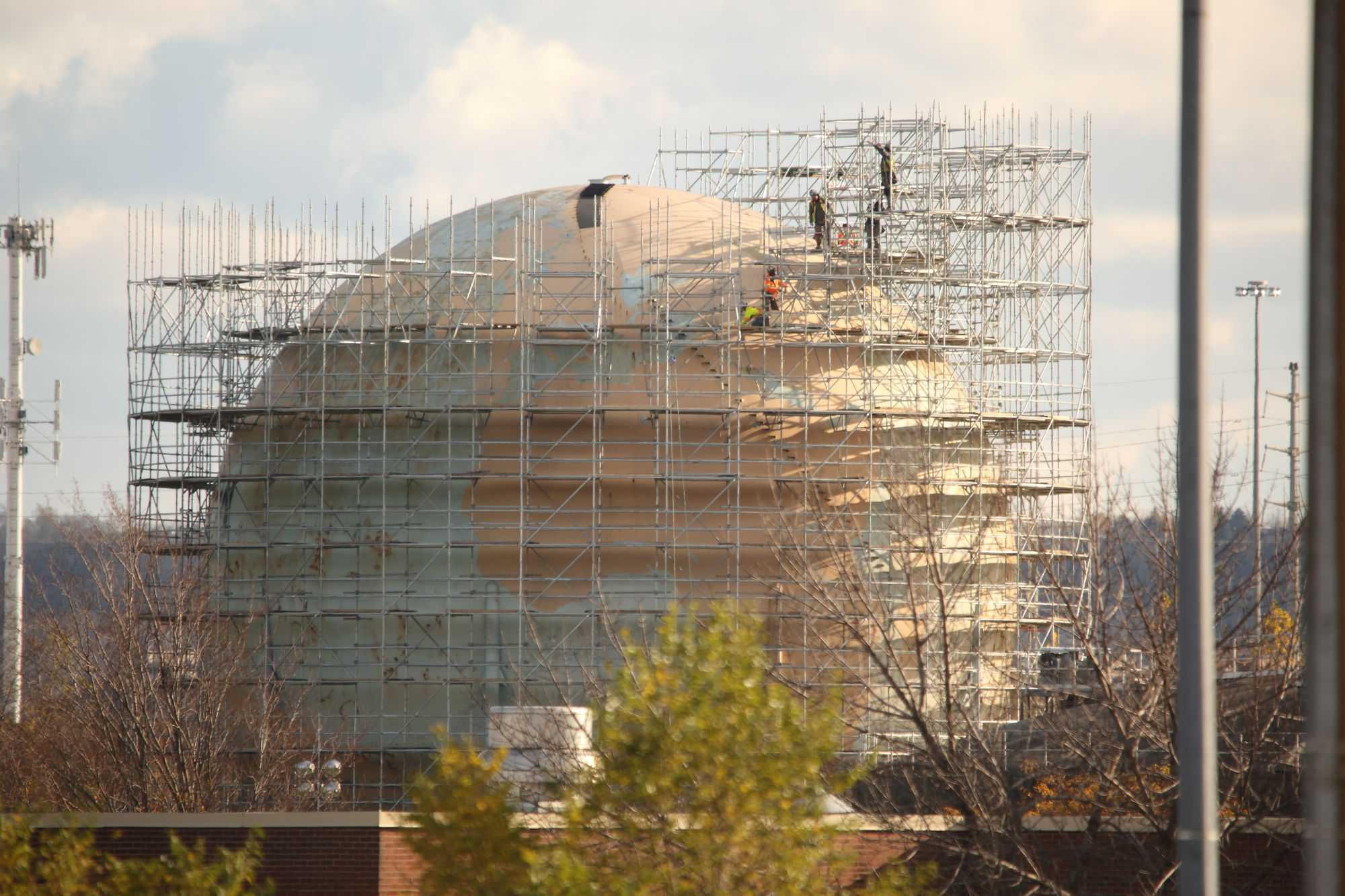 I am a little late on this one, but I was waiting to see if the globe came back on the ball, this picture was taken last February as work crews were starting to dismantle the scaffolding and as you can see, there isn't a map on it.

When the scaffolding was removed I didn't think that the map was coming back on the methane ball, but I drove by a couple days ago and it was a complete map again.

From the Spec;
VIDEO: Hamilton’s back ... on the big methane globe

The paint job on the giant orb should be completed in June.

Hamilton has found its place on the giant methane ball in Globe Park near the QEW.

The globe, a landmark with its distinctive paint scheme, under went some improvements over the winter and is undergoing repainting after first being sheathed in tarps and sandblasted.

Once the yellow is complete, the light blue water will be painted a darker colour.

The entire paint job should be done in June.

Finally got around to getting a picture of the finished globe, job well done.

Voting day looms — for Hamilton’s giant gas ball
The globe painted to show Hamilton is at the centre of the world is now facing off against hundreds of North American tanks in the oddest industry-run contest you’ve probably never heard of.
October 12, 2018 by Matthew Van Dongen The Hamilton Spectator 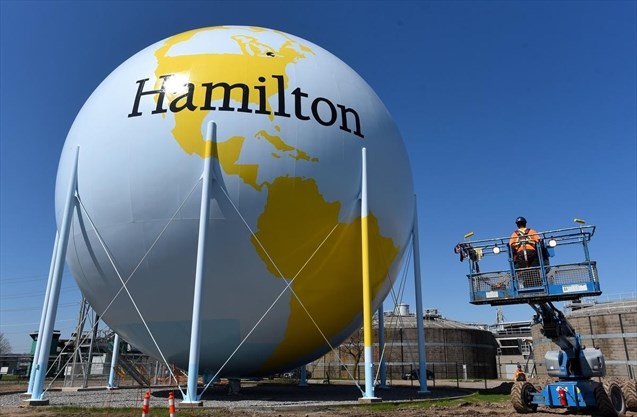 Hamilton’s famous methane tank is in the running for Tank of the Year honours. - Hamilton Spectator file photo 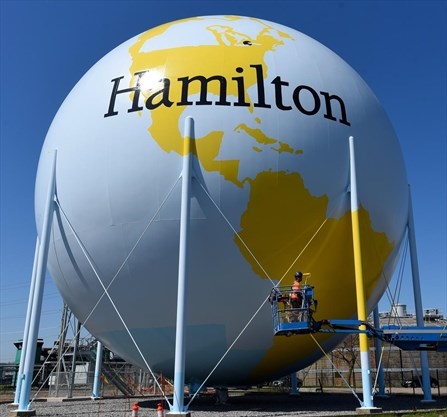 Hamilton’s famous methane tank is in the running for Tank of the Year honours. - Hamilton Spectator file photo
1 / 2
Need a break from the city election? Another vote looms that proud Hamiltonians may not know about: our sewage-gas globe is up for Tank of the Year.
The recently repainted, eight-storey-high globe — which reminds highway drivers daily that Hamilton, not Hogtown, is the centre of the world — is competing for bragging rights against 269 probably much more boring tanks across North America.


The gas ball was built in 1972 and the world's continents and oceans are painted on it — along with a locator for "Hamilton" proudly spelled out in nine-foot-high letters.

The annual contest is sponsored by industrial coating company Tnemec and recognizes the "esthetic, creative and innovative uses of its coatings on water storage tanks."
Hamilton's orb was nearly disqualified on a technicality because it is filled with methane captured from sewage treatment — not water, like almost every other tank in the contest, said Tnemec marketing manager Andrew Rogers.
"That was a big topic of discussion," admitted Rogers, who added Hamilton's globe is one of only two methane tanks in the running. "We thought with that cool design ... we should get it in there."
Rogers said Hamilton also has one of relatively few Canadian tanks in the obscure-sounding contest, which has nonetheless attracted 8,000 votes so far. You can view the competition and vote at http://www.tankoftheyear.com
The tank with the most online votes by the Oct. 19 deadline will earn the People's Choice award and an automatic spot among a group of 12 tank-tastic finalists — all of which will be featured in a tasteful 2019 tank calendar.
Last year, the winning entry was a 500,000-gallon "legged tank" based in Florida that included a mural showcasing beach chairs in white sand and an ocean view.
Hamilton's tank is more Rubenesque than leggy. The spherical shout-out to Hamilton was the brainchild of former mayor Vic Copps — and residents apparently love it, based on the outraged reaction a few years ago to the idea of selling advertising on the globe.
City sewage planning director Mark Bainbridge called the contest "great exposure" for the city and nice validation for the effort put in by the contractor, Landmark Municipal Services, on the new paint job. The project cost about $3 million, with federal and provincial governments kicking in cash to reiterate Hamilton's pride of place in the world.

We made the top ten but not a winner,