Hamilton Museum of Steam and Technology.

I stopped by the Steam Museum and took a few pictures at this event.

Check out some great pictures taken by John Rennison from the Hamilton Spectator;
https://www.thespec.com/news-story/8739196-photos-the-golden-horseshoe-live-steamers/

Hamilton's First Pumphouse.
(A publication from the City of Hamilton)

The 1850s were prosperous times in Hamilton. The Great Western Railway had located its headquarters and largest railways shops in the city which helped to stimulate economic growth. New factories and businesses were being established and Hamilton's population quickly rose past 10,000. The growing city was at the heart of the emerging Canadian Industrial Revolution.


Urbanization, however, had its costs. In early days, residents drew water from the city's public wells or purchased it from private suppliers. As the population grew, the water supply had become inadequate. The city was also without a sewer system. Therefore, the little available drinking water was easily contaminated by industrial, household and human waste.


The pollution led to the spread of cholera, the curse of 19th century urbanization. Cholera wiped out entire families in a violent and ignoble fashion. Victims suffered terrible fevers, vomiting, diarrhoea and often death. People lived in terror of a disease that attacked without discrimination for age, class or religion. In 1854, cholera in Hamilton claimed over 500 lives - 1 in every 40 residents. . By mid century, the new science of epidemiology was proving that people who drank clean water were far less likely to develop cholera than those who drank polluted water. Armed with this new knowledge, the city held a competition to choose the best design to provide a clean and steady supply of water.


The new waterworks system would not only provide Hamiltonians with water for private consumption but also feed fire hydrants. These would help to diminish destruction caused by fires and reduce the high fire insurance rates that many believed were inhibiting Hamilton's commercial and industrial expansion.


Thomas Keefer, chief engineer of the Montreal Water board and one of Canada's most noted engineers, was appointed judge of this competition.

Although his many engineering accomplishments attest to his resourcefulness and high standards, Keefer is also remembered as one of the founders of the engineering profession in Canada. He firmly believed that engineering was a professional activity, or should become one, with appropriate ethics and standards: a progressive attitude for his time. It is fitting that in 1856 he became the first engineering professor at McGill College (now McGill University).


Keefer also contributed to an emerging national identity with his two pioneering treatises on transportation: The Influence of Canals in Canada and The Philosophy of Railroads. In the latter work, Keefer crystallized the current economic theories concerning the effects of a railway on the new land. Simply put, Keefer argued that the construction of a railway would result in commercial and industrial development in the area served by the new line. He insisted that the future of Canada lay in such railway expansion.


His academic and literary work aside, Keefer was, by the mid 1850s, a highly experienced civil engineer. His dissatisfaction with the plans submitted for the competition led him to devise his own, creating a system whose principles remain virtually unchanged even today.

Other schemes for delivering water to Hamilton incorporated a variety of sources: Hamilton Harbour; entrapped streams on the Escarpment; even a diverted Grand River. Keefer criticized all of these approaches for failing on one of three grounds: inadequate supply, poor quality or excessive cost.


Keefer realized that Lake Ontario was the only practical source of water in the long term. His proposed system drew water from an infiltration basin at the lakefront and pumped it to a reservoir atop the Niagara Escarpment. From there, gravity carried the water through pipes into the city. Burlington Bay remained the dumping site for the city's waste water.


To raise water from the lake to the reservoir, the waterworks required pumps driven by steam engines. Keefer selected two independently operating 70 ton Woolf Compound Rotative Beam Engines and four Cornish style boilers. These engines were chosen for their high efficiency, reliability and steady action. They were built by John Gartshore's Dundas Iron and Brass Foundry of Dundas, Canada West.

Hamilton's waterworks was formally inaugurated in 1860 by the Prince of Wales on the first royal tour of the Canadas.

The complex was an impressive one: the enginehouse was clothed in a handsome Northern Italian chapel style building set on a mound. The height of this building was emphasized by the shorter boilerhouse with its hipped roof and simple bull's eye windows while the chimney imitated a traditional Italian campanile (bell or watch tower). As the tallest structure in the area, the 150 fwt ,-chimney could be seen several miles from shore and served a.s » navigational landmark.

Locally quarried stone was carefully cut by stone masons to form the round arches of the enginehouse windows. These arches echo the architraves of Roman aqueducts and reveal the massive flywheels of an engine completely integrated into the structure of the building.

The complex was run by two teams of at least three men: a stoker or fireman, an oiler and two engineers (one Chief Engineer and one Shift Engineer) who traded between the 13 hour night shift and the 11 hour day shift.

Working at the site could be both unpleasant and hazardous. Temperatures in the boilerhouse reached 140°F and there was the ever present danger of a boiler explosion. The stoker or fireman manually fed up to 300 Ibs of coal per engine, per hour into the boilers! He also cleaned the boilers regularly by climbing into the stuffy and dark interior and chipping at the scale.

In the pumphouse, the mutton fat based oil spread a rancid smell throughout the building. The poor lighting added to the threat of burns or getting caught in the moving engine. Oilers cleaned the engines and tended the approximately 100 oil cups in each engine. These tasks required skill since they were performed constantly while the engine was running.

Despite these drawbacks, the steady cash wages and on-site lodgings provided for the men and their families made employment at the pump desirable.

Employees were paid the very good wage of about $1.00 a day. In contrast, the Chief Engineer received roughly $2.00 a day. 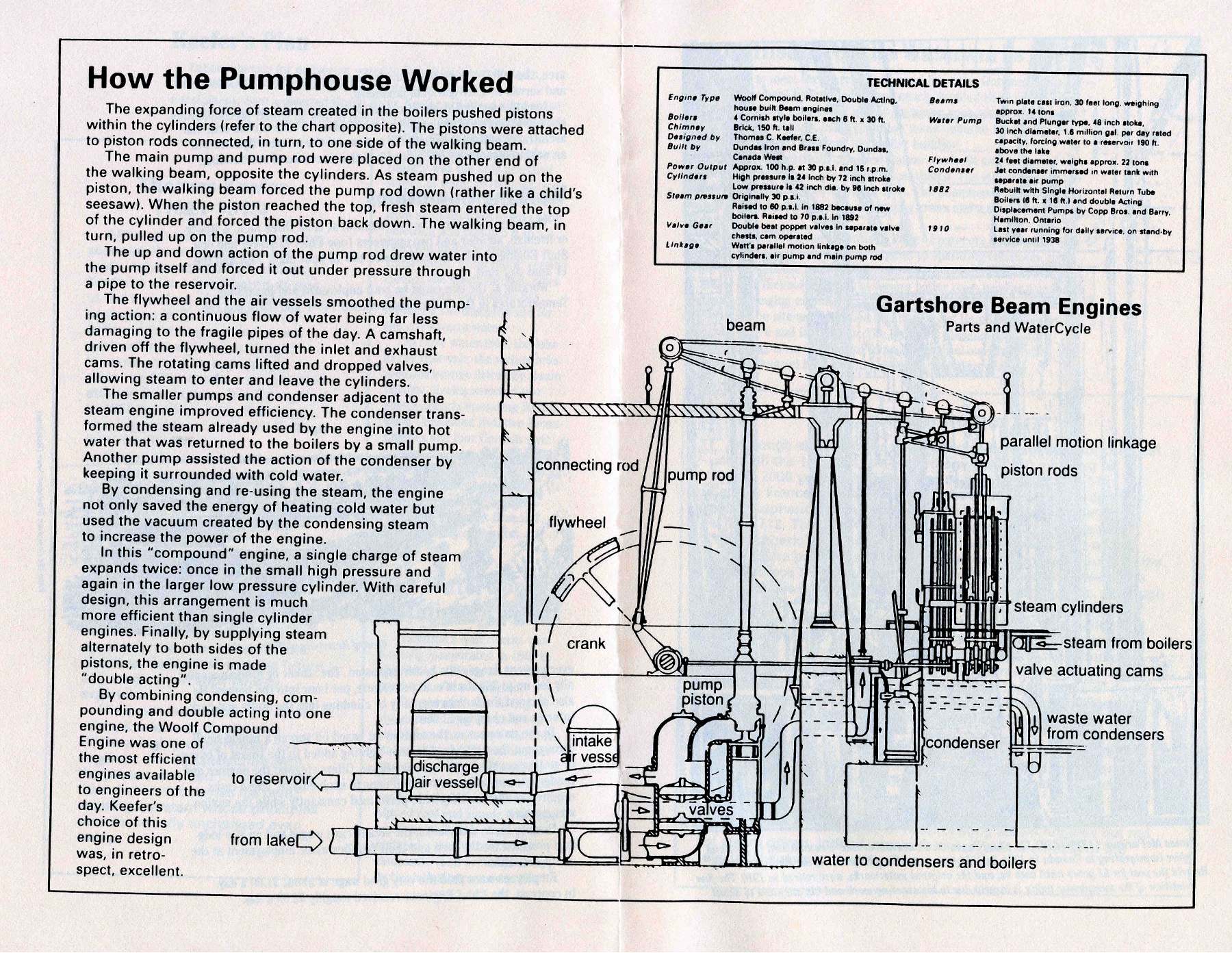 (Continued)
Later History of the Waterworks

In 1882, to meet the increased demand for water from new industries, replacement boilers and pumps nearly doubled the capacity of the station. Hamilton's industrial growth, however, soon outgrew this new capacity. A new station, using Hamilton made Osborne-Kiley engines, was erected in 1887 adjacent the earlier building.

In 1910, an electrically powered station was built and daily use of the 1859 waterworks was finally discontinued. The steam engines remained on stand-by service until 1938. The pumphouse then became vacant except for the occasional cleaning crews and a steady trickle of visitors.

During the 1970s, the Institute of Power Engineers (Hamilton Pump Group) volunteered to return the engines to operating condition. In 1983, the pumphouse was opened to the public as the Hamilton Museum of Steam and Technology with the former boiler room used as a gallery to display changing exhibits.

In 1988, the site was absorbed into the City of Hamilton's Department of Culture and Recreation. The Hamilton Museum of Steam and Technology is now dedicated to preserving and communicating Hamilton's industrial heritage including the 1859 Waterworks.

Although steam power was not actually harnessed for practical use until the 1700s, steam technology has been evolving for almost 2000 years. From the days of Ancient Greece to 17th Century France, experimenters sought to discover the properties of atmospheric pressure, vacuum and heating and cooling.

By 1712, Thomas Newcomen applied these principles to his "Atmospheric" pumping engine which used the weight of the atmosphere pushing against a vacuum to pump water out of mine shafts. Since the vacuum was created by condensing steam in a cylinder, this has been considered the first steam engine. Although very inefficient, it was able to keep deep mines free of water. It was not, however, suitable for many industrial applications.

James Watt (1736-1819) substantially modified Newcomen's engine. He separated the condenser from the steam cylinder; added a parallel motion linkage (a collection of interlinked bars that guided the piston rod); and developed the principle of double action. In the process, Watt and his competitors created steam engines both powerful, economical and steady enough to run factories.

Charles Parsons' invention of the steam turbine in 1884 eventually ended the dominance of reciprocating steam engines but not of steam power. Indeed, steam turbines generate much of the electrical energy currently used in the world.
You must log in or register to reply here.
Share: Facebook Twitter Google+ Reddit Pinterest Tumblr WhatsApp Email Link
Top Bottom